SINGAPORE - A Grab car driver who emptied cans of butane in his vehicle in an attempt to kill himself by gas inhalation ended up igniting the fuel. This caused an explosion that damaged nine vehicles, including his own, a court heard on Thursday (Dec 21).

Dwight T. Soriano, 32, pleaded guilty to two counts of performing a rash act, one of mischief and four unrelated cheating offences. Twelve other charges for similar offences will be considered during sentencing.

The court heard that Soriano wanted to end his life as he was plagued by relationship and financial problems.

He bought cans of flammable butane gas on April 26 and emptied the contents while sitting in his rented Nissan Dualis.

At about 6pm, he started feeling drowsy and drove the vehicle to a multi-storey carpark at Block 290H, Bukit Batok Street 24.

He was about to smoke a cigarette when a spark from his lighter ignited the butane gas, causing an explosion. The Nissan Dualis and eight other vehicles in the vicinity were damaged. 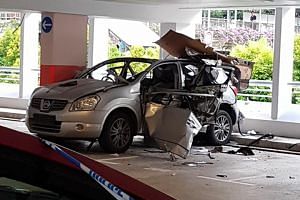 He was staying at a friend's apartment in Flora Road near Loyang Avenue when he felt depressed over unpaid loans and his failed relationship with his girlfriend.

While the friend was sleeping at around 8am, Soriano pierced a hole in a rubber pipe that connected a liquefied petroleum gas tank to a stove and began inhaling the fumes.

Soriano then stopped and left the unit when he heard his friend coming out of his room. The friend later replaced the damaged pipe when he detected the gas leak.

Besides these incidents, Soriano also admitted setting fire to a Chinese New Year decoration attached to the front door of his former girlfriend's Fernvale Link flat in Sengkang on Feb 17 to get her attention, said Deputy Public Prosecutor Derek Ee.

Soriano also cheated four men of $1,700 in all between February and April.

He had set up advertisements on online marketplace Carousell, offering cars for rent. His victims paid him up to $500 cash each but the cars were not delivered and Soriano became uncontactable.

She said her client committed the rash acts and was in a "highly unstable emotional state".

Ms Lim added that a report from the Institute of Mental Health stated that Soriano was then moderately to severely depressed.

Soriano will be back in court on Jan 5.

For each count of performing a rash act, he can be jailed for up to a year and fined up to $5,000.