SINGAPORE - A Singapore Civil Defence Force (SCDF) officer, who was allegedly involved in a ragging incident that led to the death of a full-time national serviceman in May, intends to claim trial.

On Monday (Sept 3), a district court heard that the pre-trial conference of Nazhan Mohamed Nazi, 40, will be held on Oct 1.

The first senior warrant officer is accused of intentionally aiding a group of servicemen to cause grievous hurt to full-time national serviceman Corporal Kok Yuen Chin, 22, by performing a rash act between 9pm and 9.07pm on May 13.

Nazhan is said to have failed to prevent the servicemen from pressuring Cpl Kok to enter a 12m deep pump well at the Tuas View Fire Station in Tuas South Avenue 3.

The pre-trial conference for three other SCDF officers, who are allegedly linked to the case, will also be held on Oct 1.

Adighazali, a staff sergeant, is accused of intentionally obstructing the course of justice, while Farid, a first warrant officer, allegedly abetted a rash act causing death.

Chong, a lieutenant, is accused of abetting a rash act.

In July, the court heard that a fifth SCDF officer, Mohammad Nur Fatwa Mahmood, 33, intends to plead guilty to the two charges against him.

The staff sergeant will be back in court on Sept 25. 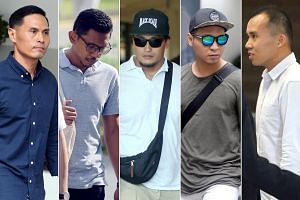 SCDF NSF who died would 'always help people, never complain, and never give up'

Nur Fatwa allegedly committed a rash act causing death and is said to have abetted the obstruction of the course of justice by instigation.

The Straits Times had earlier reported that the five men are SCDF regulars.

On May 13, Cpl Kok was celebrating his impending operationally ready date with his squad mates when he got into the pump well as part of ragging activities.

The Singapore permanent resident from Malaysia, who was due to complete his service two days later, was subsequently found unconscious at the bottom of the well.

A Board of Inquiry was convened to look into Cpl Kok's death and to make recommendations to prevent similar incidents.

Following the death, the SCDF beefed up its anti-ragging measures, including installing a metal grating across the openings of fire station pump wells to prevent unauthorised access.