SINGAPORE - Blogger Roy Ngerng, who has been found to have defamed Prime Minister Lee Hsien Loong, issued another apology to PM Lee on his blog just after midnight on Friday.

This apology came hours after a heated court hearing to assess damages Mr Ngerng has to pay Mr Lee, during which Mr Lee's lawyer, Senior Counsel Davinder Singh, pointed out that Mr Ngerng's act of republishing a letter of demand on his blog had amounted to perpetrating the defamatory content.

This was because the letter had included phrases from the libellous article, as well as hyperlinks to third-party websites on which the article was reproduced in its entirety.

In the new post on his blog The Heart Truths, published at about 12.25am, Mr Ngerng, 34, said he has removed the portion of the letter that had included the hyperlinks. He reiterated, in writing, his position in court: "I did not realise there were links in the demand letter which would lead to the article, and the related links and republication." 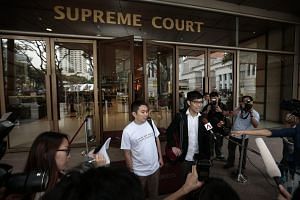 After he received the letter of demand in May 2014, Mr Ngerng apologised and deleted the defamatory May 15, 2014 blog post, in which he suggested that Mr Lee had misappropriated Central Provident Fund (CPF) savings.

But Mr Lee's lawyers, in arguing for aggravated damages, have said Mr Ngerng's conduct thereafter was egregious and indicative of the depth and intensity of the malice he held towards the Prime Minister.

On Thursday, the court heard Mr Ngerng saying readership on his blog was "generally low", with the blogger saying this was because people "didn't care" about the CPF issue.

This readership however spiked after he published Mr Lee's letter of demand in a post titled "I Have Just Been Sued By The Singapore Prime Minister Lee Hsien Loong".

Mr Ngerng said he was petrified and anxious when he got the letter. But Mr Singh pointed out that these purported feelings were not in line with his publication of the letter and the tone of his blog post.

That article had contained such statements as: "I have tried my best to advocate for my fellow citizens. However, today, I am sued by the very Government which should be protecting its citizens, such as me. This is disappointing."