SINGAPORE - A primary school's administrative employee who sexually abused three brothers studying there was on Wednesday (Nov 15) sentenced to 18 years' jail by the High Court.

The 53-year-old diagnosed paedophile had started with the eldest boy in 2009, when he was 11.

After the boy left the school, the predator, who by then had gained the trust of the family, moved on to his siblings.

The three boys revealed the abuse in March 2013 after their mother received a text message from the man, asking if he could take her second son out. She then asked the boy about it.

In sentencing, Justice Hoo Sheau Peng said the man had abused the trust of the boys' parents. "A stiff sentence is called for to reflect the gravity of the offences," she said.

The man cannot be named under a court order to protect the identities of the boys, who are now aged 17, 18 and 19.

He has been in custody since he was arrested on March 22, 2013, two days after the boys' parents made a police report. He cannot be caned as he is above 50 years old. 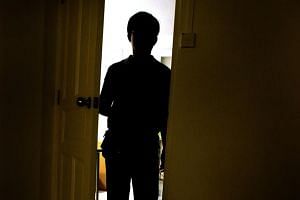 Another 31 counts were taken into consideration during sentencing.

Of the 36 charges, seven relate to the eldest brother, 22 to the second and five to the youngest. Two other charges are for possessing obscene and pirated films.

The bespectacled, grey-haired man befriended the eldest boy, then in Primary 5, in 2009. He took the boy from school to the zoo and to shopping centres.

That year, he performed oral sex on the boy at an HDB staircase landing. He also showed the boy how to do a lewd act but the boy refused to do it.

When the boy went to secondary school, the man moved on to his younger brothers. He bought them shoes and clothes, telling their parents he was following up on their homework.

The parents, who worked long hours, thought he was genuinely concerned for their welfare.

The middle son, who was perceived by the man as being more compliant, suffered for three years, the longest ordeal among the three.

In 2012, the man forced him, then 13, to perform oral sex on him in the toilet at a community centre.

The next year, the accused met him and his younger brother, then 12, after school one day and accompanied them back to their home. He abused them, one after the other, on the same bed. No one else was at home at the time.

In mitigation, the man's pro bono lawyer, Mr Remy Choo, argued that 16 years' jail was sufficient as a deterrent.

He submitted a letter from the man's daughter pleading for leniency.

The 16-year-old, who has been handling her father's case, said her mother has been struggling with finances. She added that she has had to lie to her two younger brothers about their father's whereabouts.

"It has definitely affected learning at school as I have more on my plate than a regular 16-year-old," she wrote.