SINGAPORE - The police said on Wednesday (Oct 30) that they are investigating another case of illegal fireworks that were set off during the Deepavali long weekend.

The latest case happened in Jalan Rajah at 1.20am on Monday, and comes after illegal fireworks were set off in Jurong West on Sunday night.

For both incidents, no injuries were reported.

In the Jalan Rajah case, a 45-second video posted on citizen journalism site Stomp shows fireworks bursting in the sky beside a building by a road. The fireworks rise above the block, which is at least 10 storeys high.

Police on Wednesday warned members of the public that it is an offence to possess, sell, transport, send, deliver, distribute or import any dangerous fireworks.

"The police have zero tolerance against acts that endanger the lives or safety of others as well as cause undue alarm to the public, and will not hesitate to take action against those who blatantly disregard the law," the police added.

This follows an earlier case of fireworks being set off on Sunday night in Jurong West.

In a video posted on Facebook on Monday of the incident, fireworks are seen to be launched between two Housing Board blocks, as residents in a nearby block of flats watch from the corridor. 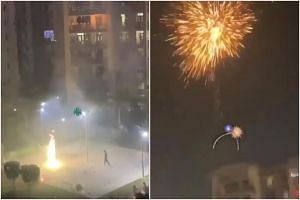 Police said on Tuesday that a 38-year-old man was arrested for his suspected involvement in setting off the fireworks in Jurong West.

The Government banned fireworks in 1972 following public safety concerns, although it has in recent years granted permission at certain events after appropriate safety measures have been adopted.

In March, cleaner Alagappan Singaram, 54, became the first person to be convicted under the Dangerous Fireworks Act.

He was fined $5,000 after admitting to setting off fireworks in Bukit Batok with his son in November last year.