SINGAPORE - The police on Thursday (Feb 22) released a photo of a man they are looking for to help in their investigations into a case of assault.

The assault happened at Block 1, Changi Village Road, on Feb 15, the eve of Chinese New Year, at about 10.30pm.

The Straits Times earlier reported that a 43-year-old male 7-Eleven employee at the location had been attacked for half a minute, and left with blood streaming down his face and a blood-spattered work polo shirt.

A witness also said there was blood on the walls.

The assailant had allegedly been unhappy that he was unable to buy beer after the cut-off time for retail shops.

The employee, who had been alone in the store at that time, contacted the police and called for an ambulance. 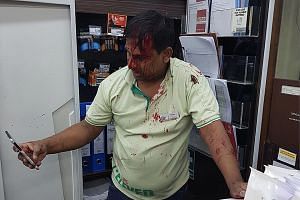 He was taken to Changi General Hospital, where he received outpatient treatment.

The police are requesting those with information on the person in the photo to call 1800-255-0000.

Information can also be submitted online at www.police.gov.sg/iwitness

All information will be kept strictly confidential, said the police.