SINGAPORE - The lawyers of Prime Minister Lee Hsien Loong have asked the High Court for a very high award of damages in the defamation case against blogger Roy Ngerng, saying that Mr Ngerng's actions have been deeply and intensely malicious.

Mr Ngerng also remains determined to damage Mr Lee's reputation, the lawyers added in an opening statement submitted to the court on Wednesday, at the start of a three-day hearing.

This week's hearing is to to assess the amount of damages Mr Ngerng has to pay Mr Lee. 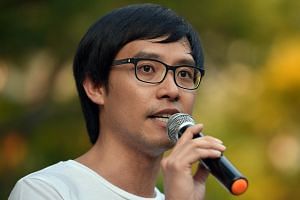 Mr Lee's lawyers noted that previous awards in defamation cases involving top government ministers ranged from $100,000 to $400,000, and argued that a higher quantum should be awarded in this case given, among others, the extensive republication of the libel, Mr Ngerng's egregious conduct, and his malice and continuing attacks against Mr Lee.

"From the very first, the defendant set out to wound," PM Lee's lawyers said of Mr Ngerng and his initial blog post.

"He knowingly and maliciously published a false and vicious libel against the plaintiff to inflict maximum injury. He then cynically capitalised on, and continues to exploit, that libel and the ensuing lawsuit to promote himself as a champion of free speech."

In the process, Mr Ngerng has misled Singaporeans, Mr Lee and even his own lawyers, by apologising and taking down the defamatory statements, then posting them online again, the statement said.

He undertook not to repeat the libel but broke his promise, and claims he is sincere about wanting to resolve matters but continues to aggravate the injury, it added.

In his post, Mr Ngerng juxtaposed a Channel NewsAsia chart detailing the relationship among City Harvest Church (CHC) leaders, against his own chart of the purported ties between the CPF and PM Lee and sovereign wealth fund GIC.

Six current and former CHC leaders are facing prosecution for the alleged misuse of $50 million in church funds.

After receiving a letter of demand, Mr Ngerng had removed the blog and posted an apology. But he later sent the blog post to the media and repeated his defamatory allegations in other online articles and interviews.

Said Mr Lee's lawyers: "This case stands out for the depth and intensity of the defendant's malice toward the plaintiff and his resolve to damage the plaintiff's reputation."

The lawyers cited previous defamation cases to argue that allegations of corruption and criminal conduct "are grave charges", especially if made against the Prime Minister of a country.

They further said that Mr Lee's "life, reputation and ability to lead Singaporeans and GIC are all founded on his unflinching fidelity to integrity".

"It is therefore an extremely serious matter for the defendant to accuse the plaintiff of criminally misappropriating the monies paid by Singaporeans to the CPF," they said.

"Such an allegation undermines the plaintiff's ability to lead the country, sustain the confidence of the electorate and to discharge his functions as Prime Minister and chairman of GIC."

In addition to making the defamatory statements, Mr Ngerng had sought to rally people to his cause, by promising to speak the truth and to speak up for them, the lawyers added.

He had also jumped at the opportunity to use the ensuing lawsuit to promote himself, and advance his political agenda, they said.

For instance, Mr Ngerng had posted on his blog the entire letter of demand sent to him by Mr Lee's lawyers, to attract more attention, the lawyers said. This was despite knowing that the letter had described the offending words and images he was asked to take down.

The lawyers said: "If the defendant's actions have proved anything, it is that he harbours a deep seated hatred of the plaintiff. That is the only explanation for the venom in his continuing attacks and his relentless aggravation."

They urged the court to "express, in strongest terms, its indignation" at Mr Ngerng's conduct.

"The case for a very high award of damages, including aggravated damages, is compelling," they added.