SINGAPORE - The three-day hearing to assess the amount of damages blogger Roy Ngerng has to pay Prime Minister Lee Hsien Loong for defamation began on Wednesday (July 1) morning in the High Court.

PM Lee is claiming aggravated damages, asserting malicious intent in Mr Ngerng's publication of the article on May 15 last year on his blog The Heart Truths.

Mr Ngerng turned up in court at around 9.30am, clad in a black blazer and casual grey pants with a bright pink suitcase in tow. He told The Straits Times the suitcase contained all his documents. His entire family was also present.

Blogger Ngerng arriving at the High Court on July 1

PM Lee is understood to have arrived shortly after Mr Ngerng.

Representing himself, Mr Ngerng also apologised to PM Lee in his opening statement to the court. "I'm glad I can meet you in person for the first time and I do apologise for any defamatory things that I might have said," he said.

In the May 15 post, Mr Ngerng juxtaposed a Channel NewsAsia chart detailing the relationship among City Harvest Church (CHC) leaders, against his own chart of the purported ties between the CPF and PM Lee and sovereign wealth fund GIC.

Six current and former CHC leaders are facing prosecution for the alleged misuse of $50 million in church funds.

Justice Lee noted the case "has come to be associated with the criminal misappropriation of funds in the mind of any ordinary, reasonable person". He also noted that, in Mr Ngerng's post, "the allegation that 'money is being misappropriated' is unconditional and unequivocal".

It contains as well an implicit comparison between the lack of information given to auditors in the CHC case, and the lack of transparency with regard to CPF monies, added Justice Lee. This, he said, carries the implication that Mr Lee is reluctant to be transparent about the finances of the Government and GIC "because he wants to conceal the evidence of the criminal misappropriation".

In issuing a summary judgment - which means giving a ruling without the case going to trial because the court agrees with the applicant that the defence arguments are baseless - Justice Lee had said he could not accept Mr Ngerng's only defence that the lawsuit was unconstitutional. 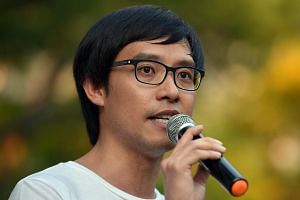 He also ruled that Mr Ngerng cannot republish the allegation of criminal misappropriation, but his freedom of speech would not be curtailed.

The blogger has continued to blog about the CPF issue.

Last month, he made an attempt in the High Court to engage Queen's Counsel (QC) Heather Rogers to argue his case at the hearing on damages.

But it was dismissed by Justice Steven Chong, who said that although QC Rogers is eminent in the field of defamation law in the United Kingdom, she does not have special qualifications or experience to argue Mr Ngerng's case here as it is "local-centric".

Also, the case at the damages stage was not complex enough to require even a local Senior Counsel - let alone a QC - and that Mr Ngerng had thus far been "content" with being represented by local lawyers who are not Senior Counsel, he noted.

This was so, even during the hearing to determine liability, which is "more complex" in nature, said Justice Chong.

He ordered Mr Ngerng to pay $6,000 to PM Lee for legal fees he incurred in the blogger's unsuccessful bid.

This is on top of the $29,000 in legal fees and related expenses the blogger paid PM Lee on Feb 6.