He says '32 years' in title refers to his age then, not duration detainee was held and restricted

Artist and activist Seelan Palay has denied in court that his performance art piece last October was to commemorate the detention of long-time political detainee Chia Thye Poh.

On the second day of his trial yesterday, he said that in the title of his performance, 32 Years: The Interrogation Of A Mirror, the "32 years" referred to his age at that time.

But Deputy Public Prosecutor Dwayne Lum, in his opening statement, said: "The reference to '32 years' was ostensibly a reference to it being 32 years that Dr Chia Thye Poh was arrested and detained under the Internal Security Act in October 1966."

He pointed out that Seelan had quoted Dr Chia during the performance at the Speakers' Corner in Hong Lim Park on Oct 1 last year.

Seelan replied: "The publicised image is meant to be open to interpretation."

Seelan, now 33, is on trial after he allegedly staged a public procession outside of Hong Lim Park without a permit between 2.23pm and 3.15pm on Oct 1. 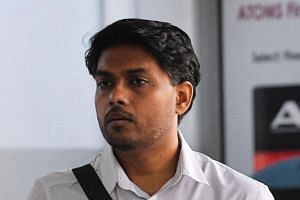 A permit he had received from the National Parks Board for his performance was restricted to the Speakers' Corner in the park.

Seelan is said to have committed an offence when he allegedly stepped out of the park and walked to the National Gallery, where he used a marker to draw on a mirror that he had been holding.

He then walked to the Parliament House and stood in the middle of an entrance to a driveway, with the mirror in front of him. When he refused to budge, police arrested him.

Yesterday, Seelan told District Judge Salina Ishak that during the event, he did not address anyone or instruct them to follow him around.

He said the spoken parts of his performance at the Speakers' Corner were addressed to the mirror, which he later carried to the other two locations.

Seelan, who was not represented by a lawyer, said the point of his performance was "to remain silent throughout" and he responded to the authorities only "out of necessity and courtesy".

During cross-examination, the DPP asked him if his audience was close enough to hear what he was saying to the mirror. He replied: "It does not matter if they can hear or not because an audience is not required for performance act."

The court, however, heard that in Seelan's application for the performance to be held at the Speakers' Corner, he had stated that he expected about 50 people to turn up.

The judge is expected to give her verdict next Wednesday.