Legal experts, community leaders and academics have reservations and worry about vigilante justice

Should closed-circuit television (CCTV) footage be shared online so that members of the public can help to identify culprits in crimes?

This question came up following two incidents recently in which CCTV footage was shared on Facebook to pinpoint who had taken the belongings of individuals.

Digital marketing consultant Denise Neo, 26, had left her phone on the counter of a LiHo drink outlet in Bugis Junction on Oct 29, and returned minutes later to find it gone.

She requested the CCTV footage from the store and posted it on Facebook. Within two days, two people messaged her and identified the person who had taken her phone. Ms Neo got her phone back and the suspect is now helping police with their investigations.

"I hoped people could help me," she told The Sunday Times. "Even if I didn't get my phone back, someone may recognise the culprit and she won't get away scot-free."

On that same Sunday, a man was caught on film allegedly taking a sling bag at Dunman Food Centre and the CCTV footage was posted on Facebook by Mr Hing Yi Quan, 27, co-owner of Dragon City Claypot Frog Porridge.

I hoped people could help me. Even if I didn't get my phone back, someone may recognise the culprit and she won't get away scot-free.

MS DENISE NEO, a digital marketing consultant, who had left her phone on the counter of a LiHo outlet in Bugis Junction.

At the end of the day, our goal is to provide a safe and secure environment for all our guests, and peace of mind when they visit LiHo outlets to enjoy our freshly made beverages.

A LIHO SPOKESMAN, on the CCTV cameras in all of its outlets

It is true that posting CCTV footage has value because the culprit gets identified, but the concern that I have is abuse, when vigilante justice occurs or if people find the wrong person.

LAWYER NICHOLAS AW, noting that there are no laws that prohibit such videos from being uploaded online.

Mr Hing said the bag belonged to his employee, who realised it was missing after she had left it on a table in front of the stall.

"I posted the footage because I hoped our regular customers might see the guy around and could provide us with more information," Mr Hing said.

He also received responses from people who could identify the man who took the bag.

"I personally feel that social media is quite powerful," he said. "More than anything, I want to help my staff get the bag back."

As of press time, the thief has not been found yet.

But while these incidents appear to point to the value of such footage, legal experts, academics and community leaders say it is not clear-cut that releasing it to the public is the right thing to do.

Mr Zaqy Mohamad, chairman of the Government Parliamentary Committee for Communications and Information, said that such footage should be shared first with the police and used sparingly on social media.

"I caution against this becoming common practice," he said. "There are issues of privacy where store patrons become afraid that their footage can be distributed anywhere. There are two sides of the coin - success as in these cases, but also concerns if it proliferates."

Lawyer Nicholas Aw noted that there are no laws that prohibit such videos from being uploaded online.

"Now, people take videos of others all the time - on the train, for instance," he said.

But he has his reservations. "It is true that posting CCTV footage has value because the culprit gets identified, but the concern that I have is abuse, when vigilante justice occurs or if people find the wrong person. So, people should be careful and be clear of the effect before posting such videos," he added.

Sociologist Paulin Straughan agrees, noting the pitfalls of vigilante justice. She said: "There should be guidelines and legislation in this age of technology to protect individuals and their privacy.

"Trial by popular media can be dangerous."

A spokesman for LiHo said that CCTV cameras are installed in all of its outlets for security purposes. 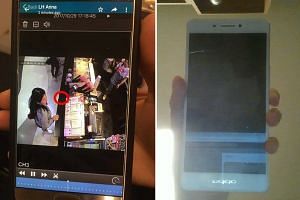 Woman whose phone was stolen at LiHo gets her phone back, suspect assisting police probe

"At the end of the day, our goal is to provide a safe and secure environment for all our guests, and peace of mind when they visit LiHo outlets to enjoy our freshly made beverages," he added.

Dragon City Claypot Frog Porridge's Mr Hing said that such footage can be important in solving potential disputes with customers.

"Sometimes, there can be disagreements over payment when a customer says he has paid and we are unsure... (and) if there is a break-in, the CCTV will record it," he said.

In any case, this is an issue that can only become more complex in the future.

Mr Daegan Tan, manager of CCTV supplier Field Safe, said that the demand for surveillance equipment from shops, offices and residences has gone up in the past two years.

"For retail businesses, the camera normally points at the cashier area or at the entrance of the shop to see if there is shoplifting," he said.

"It depends on individual owners whether footage should be released. Since places like malls are public areas, owners may be willing to do so, as opposed to a more private area like a residence."

Should CCTV footage be shared online to nab culprits?