SINGAPORE - A district judge has rejected bail for a Myanmar national accused of abetting others in a conspiracy to murder a fellow countryman.

Yae Wynnt Oaung had applied for bail pending trial through his lawyer SS Dhillon in a bail review on Tuesday.

The prosecution objected, saying the 32-year-old is a flight risk with no roots in Singapore, no job here and no property.

The court had reserved its decision until Wednesday.

Mr Dhillon had argued that his client, who is a cousin and works for the alleged mastermind Win Kyaw Kyaw Aung, 29, was not present when Aung and Oaung's two co-accused, Zaw Min Hlaing,37, a Singapore permanent resident, and Myanmar national Phyo Min Naing, 32, tried to abduct Mr Aye Maung Maung Thet, 28, at a multi-storey carpark at Pasir Ris Street 7 on June 21 this year.

They had allegedly schemed to murder the engineer.

Two of the men allegedly tasered Mr Thet who raised an alarm at the carpark. His attackers fled.

Oaung, the court heard, had travelled to Singapore regularly to handle his 29-year-old cousin's business dealings. Aung, who is a wealthy businessman, is believed to have left Singapore about two days after the alleged incident.

In the course of investigation, police recovered an assortment of items from Aloha Changi chalet, which was supposed to be the place of the planned murder. They included a meat mincer, a chainsaw, trolley bags, plastic sheets, cable ties, a cleaver and a chopping board.

In his decision, District Judge Eddy Tham said the offence was very serious, and hurt had been caused to the victim.

He said Oang was clearly involved in the surrounding events even though he was not present during the actual attempt to abduct Mr Thet.

"I am satisfied that there is some evidence to link the accused to the offence,'' he said. 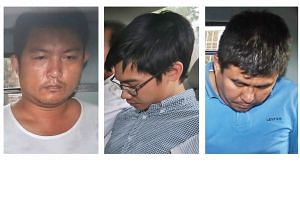 He also agreed that the flight risk here was substantial given that the mastermind is at large and may be able to help Oaung.

Judge Tham noted that Oaung is receiving treatment for his tuberculosis, is well enough to come to court and has been able to give instructions to counsel in putting up substantial details of his defence. He then ordered that no bail be granted.

If convicted, the trio face a jail term of up to 14 years with the option of a fine.