They say such machines dispense random prizes after cash payment, which is a form of public lottery

Vending machines offering mystery prizes have been deemed illegal by the police.

The number of such vending machines in Singapore has grown, with at least four operators setting up shop in malls, arcades and retail stores in the past year.

They dispense random prizes upon receipt of cash payment, which is a form of public lottery and therefore an offence under the Common Gaming Houses Act, the police said in a statement yesterday.

"Existing merchants operating such vending machines are advised to cease these operations."

Such machines first gained popularity overseas last year, in places such as Japan, Taiwan and Malaysia.

Here, they are found mostly in malls, charging between $5 and $10 for a "mystery box" containing a prize.

While the boxes usually contain low-value items such as cheap coin pouches or USB chargers, operators often claim that big prizes such as smartphones or gaming consoles are there to be won.

Operators told The Straits Times that they were surprised by the news. Unlike with gambling, there is no chance of walking away empty-handed, and items dispensed from their machines are of equal or higher value than the amount paid, they argued.

Among the earliest to the trend here was hypermarket Giant, which launched its own "mystery box" machines as part of its VendMart vending clusters at its Tampines and IMM outlets in October last year.

For $10, the opaque machines would dispense vouchers for a surprise item worth a higher value, such as household appliances and kitchen gadgets.

In response to queries, a Giant spokesman said it ceased operating the two machines last December. Similar machines operated by third-party vendors at several of its outlets were removed from store premises yesterday, the spokesman said.

When The Straits Times visited the Virtualand arcade at Nex mall in Serangoon yesterday, several "mystery box" machines were still operational. The arcade's duty manager said that she was unaware the machines are now illegal.

Other vending machines, such as those at arcades in which players pay a fee for a chance to grab prizes with a claw, are still legal, the police clarified. This is because players can see the prizes.

Addiction specialist Thomas Lee said that while he does not think such machines pose a major threat, the danger is that children are drawn to it and may spend money on it.

"The whole idea of gambling is betting on an outcome that is random, unpredictable and you have no control over. So, whether you get something at the end or nothing at all, it is still gambling," said Dr Lee, who is medical director and consultant psychiatrist at the Resilienz Clinic. 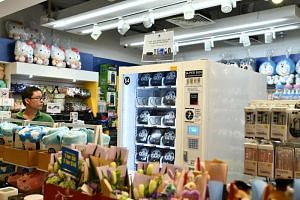 Ms Sherryll Lim, who had a go at a machine in Liang Court in June, said the $5 she spent on an eye mask was probably a waste of money, though not an act of gambling.

"Personally, I think it is just a gimmick. I just played for fun. Maybe some people try to win the big prize and keep playing like they are addicted, but I also see adults spending an hour at those soft toy machines... it is just human greed or that mentality to win,"said Ms Lim, 38, who is unemployed.