Unclear if items were with maid, who is a suspect, when she left on ferry to Indonesia

Money and valuables were missing from the Bedok Reservoir Road home of an elderly couple who were murdered on Wednesday, reported Chinese newspaper Shin Min Daily News.

Indonesian maid Khasanah, 41, a suspect in the deaths of Mr Chia Ngim Fong, 79, and his wife Chin Sek Fah, 78, is believed to have fled to Indonesia.

It is unclear if the missing items were on her when she left on a ferry from HarbourFront Centre.

The bodies of the elderly couple were found in their five-room executive flat at Block 717, Bedok Reservoir Road, on Wednesday afternoon by their grandson.

The Straits Times understands that they were found with their hands tied with raffia string. Mr Chia was discovered in the master bedroom with blood stains on his body. Madam Chin was in a bathroom with injuries to her neck.

Ms Khasanah had lived with the couple for about a month.

According to Chinese evening daily Lianhe Wanbao, she had started a chicken rice stall with a friend in Jakarta after working in Singapore for some time as a maid, but the business failed and she lost a lot of money. 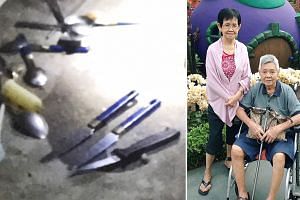 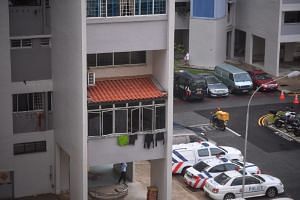 To support her 16-year-old son, the single mother decided to return to Singapore to work, said Shin Min.

Though she went to school and lived in Jakarta, Ms Khasanah was born in Kebumen in the southern part of Central Java, the newspaper added.

It is understood that police have contacted their Indonesian counterparts to assist in investigations.

At least five family members were at the morgue to claim the bodies yesterday, leaving about half an hour later visibly upset. They declined to speak to the media.

When the bodies arrived at the block at about 4.30pm, family members were heard shouting in Mandarin: "Dad, mum, come home."

The mood was sombre at the couple's wake, where about 20 people had gathered in the late afternoon.

A family member, believed to be the couple's eldest son, told The Straits Times that everyone in the family was still in shock.

He added: "Even though we appear calm, all of us are hiding our emotions inside."

He declined to comment further, saying they "want to keep it a low-key affair".

The couple's eldest son and a daughter run a maid agency at Bukit Timah Shopping Centre.

Retiree Yan Ah Ba, 79, who had known Mr Chia and Madam Chin for more than 60 years, said they used to run a stall selling shoes at Haig Road Market, where he sold vegetables.

Mr Yan, who heard what had happened from a friend, said Mr Chia sold his shoe shop to retire.

"He was a very good friend and we met up regularly about once every few months," he said in Mandarin.

"We met for a meal last month, and we were scheduling another meet-up with others this month, when another friend comes from Malaysia.

"Regretfully, it will not happen anymore."

The funeral will be held next Monday.