SINGAPORE - It has been confirmed that alleged match-fixing kingpin Dan Tan Seet Eng is being detained without trial under the Criminal Law (Temporary Provisions) Act (CLTPA).

In a statement issued at 5pm on Saturday, the Home Affairs Ministry (MHA) said that Minister for Home Affairs and Law K. Shanmugam, with the consent of the Public Prosecutor, has issued a Detention Order for the 51-year-old, for his involvement in global match-fixing.

Tan was detained without trial for two years before he was released last week after the Court of Appeal found that his alleged match-fixing activities did not threaten public safety here. Tan was re-arrested by the police on Dec 1 . 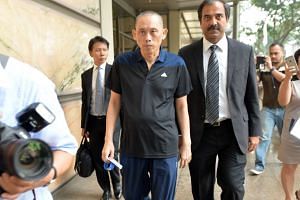 Grounds to be set out in full if Dan Tan is detained: Shanmugam

" MHA respects and accepts the Court of Appeal's judgement.

"The new Detention Order which has been issued against Dan Tan, expressly sets out the grounds which show the extent of Dan Tan's match-fixing activities from and within Singapore, and why this necessitates the issuance of a Detention Order under the CLTPA. The grounds set out the seriousness of Dan Tan's criminal activities over many years, their impact on public safety, peace and good order within Singapore, and the fact that he has intimidated witnesses to the extent that they continue to be unwilling to testify against him for fear of reprisal."

In a Straits Times report on Saturday, Tan's lawyers said they had been told he was being held under the CLTPA. They added: "The lawyers have requested for permission to meet with (Tan), but we have been told that investigations are ongoing and we will not be able to see him just yet."