SINGAPORE - A watch manager of air traffic control at Changi Airport repeatedly molested his domestic helper in his home when his family members were away on holiday.

Stanley Cheng Kim Han, who has been employed by the Civil Aviation Authority of Singapore for more than 20 years, placed his head on the 23-year-old Myanmar national's right shoulder on Nov 28, 2016.

The next day, Cheng, 44, a married man and father of two, hugged the woman from behind and used the fingers of his left hand to touch her chest over her clothes.

The Myanmar national, who cannot be named due to a gag order, started working in Cheng's Bedok Reservoir flat on Sept 22, 2016. The court heard that this was the first time she had left her village to work overseas.

Deputy Public Prosecutor Asoka Markandu said in his submissions that Cheng, who was her registered employer, had a habit of brushing against or touching the woman when he walked past.

The DPP added that the nature of these contacts were "brief and innocent", such that the maid did not have any cause to be concerned.

Cheng and the maid were left alone in the flat after his wife, two children and parents-in-law flew to China for their holiday at around 3am on Nov 27, 2016.

He molested her inside a bedroom the next day by placing his head on her right shoulder.

During the trial, the maid had testified that she "didn't feel anything" after he molested her for the first time.

Cheng struck again at around 5.40pm the next day, when he hugged her from behind in the master bedroom toilet and touched her right breast.

She felt "angry and scared" this time round, the court heard.

She had told the court: "I was scared and just (did) not know what to do. Then I felt shame."

Cheng later left the flat and she told her trainer at the maid agency about what had happened.

Cheng returned home at around 9pm and found the maid crying. She told him she wanted to be sent back to her agency.

The firm's branch manager later told Cheng about the maid's allegations. The manager also advised him to accompany the maid to a police station and file a report.

Cheng lodged one on Nov 30, 2016, but lied in his report, claiming that the maid had accused him of rape instead.

DPP Asoka said: "It is suggested that the reason the accused lied in his police report was because he wanted the victim to appear as someone who had made a frivolous and false claim against her employer." 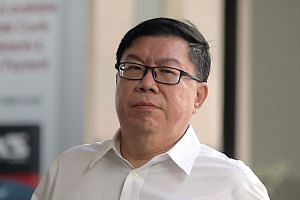 Father of two jailed 11 months for repeatedly molesting maid, causing her to flee one night

During the trial, the defence, led by lawyer T.M. Sinnadurai, had asserted that the maid had a motive to falsely implicate Cheng.

Among other reasons, the defence said she was unhappy with him, as she missed her family back in Myanmar.

In response, the DPP said: "There is no evidence whatsoever to support the assertions that the victim was unhappy with her employer."

Before giving his verdict on Wednesday, Judge Foo said he accepted the maid's evidence, as it was convincing. It was not stated where the maid is now.

A CAAS spokesman said that the authority suspended Cheng after he was charged in court in July 2017. "CAAS is unable to comment on the case as it is before the courts," said the spokesman.

For each count of molestation, he can be jailed for up to two years and fined or caned.