SINGAPORE - The man who allegedly drove a car into the waters off Sentosa last Friday (Aug 25) has been charged with committing a rash act.

Lim Jin Ping, 36, was hauled to court on Saturday and is now accused of endangering the personal safety of others by colliding into one Mr Irman Kamarudin .

As a result, Mr Irman suffered a cut on his right knee.

A man had been seen driving into the water last Friday while he was pursued by two Sentosa rangers on motorcycles.

An eyewitness, Mr Ang Chee Boon, 56, told The Straits Times that he was on a boat with his skipper when they saw the two rangers pursuing a white car.

"Suddenly, we heard a very loud noise and we saw the car going through the barriers and into the sea," said Mr Ang, who runs a boat chartering company. 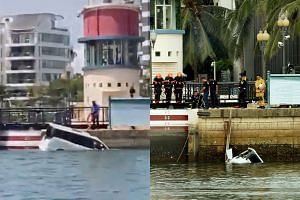 Man rescued after driving car into sea at Sentosa Cove

Super- yacht captain David Roberts, 36, whose vessel happened to be near the spot where the car plunged into the sea, then stripped down and swam towards the sinking vehicle.

He said: "By then, the car had already sunk to the bottom. I tried to open the doors, but I couldn't."

He managed to reach in through a small opening in one of the windows and unbuckle the man's seat belt, but could not pull him out.

He resurfaced and saw some men looking on from the road near the broken barrier.

Mr Roberts said: "I asked those guys to give me a rock or something to break one of the windows."

One of the men loosened a stone from the ground and passed it to him. Mr Roberts then broke one of the windows and rescued the man.

ST understands that the vehicle was pulled out of the water at around 1.30pm on Saturday.

Lim is now remanded at the Institute of Mental Health and will be back in court on Sept 8.

If convicted of committing a rash act, he can be jailed for up to a year and fined up to $5,000.