A cleaner found a toy grenade while working at Istana Park and decided to display the object in an upright manner to see how people would react when they found it.

Elankovan Marimuthu got more than he bargained for when a motorist alerted the police after spotting the toy around 2pm on Nov 3, 2017, sparking an operation involving 39 officers from various units.

Eight Singapore Armed Forces officers from the Chemical, Biological, Radiological and Explosives Defence Group were also deployed to the park near Orchard Road.

The nearby Penang Lane was partly cordoned off to traffic for 45 minutes and fully closed for half an hour as the officers had to ascertain whether the grenade-like object was a threat to public safety. It was finally re-opened around 5pm after they confirmed it was only a toy.

Elankovan pleaded guilty yesterday to using threatening behaviour to cause alarm and was fined $4,500.

Deputy Public Prosecutor Thiagesh Sukumaran said the cleaner was working at Istana Park around 7am on Nov 3, 2017, when he spotted the toy grenade near a fire hydrant in Penang Lane.

It was not stated how the object ended up there. 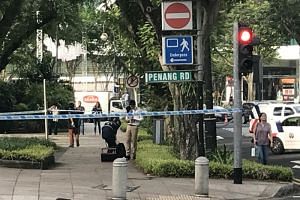 The DPP told the court Elankovan used a pair of tongs to position the item in an upright manner.

He said: "The accused decided to position the item in such a manner because he wanted to see how the public would react to the item once it was discovered. The accused subsequently left the scene."

Two motorists at the junction of Penang Lane and Orchard Road that day spotted the toy around 2pm. One of them then called the police, sparking the operation.

The court heard that Elankovan, 59, was caught after the authorities viewed closed-circuit television footage of the area which showed him handling the toy.

DPP Thiagesh pressed for a fine of $4,500, telling District Judge May Mesenas that Elankovan's offence had led to a waste of public resources.

Defence lawyer Rajan Supramaniam from Hilborne Law pleaded for leniency and added: "Our client is not a highly educated person and had only obtained Primary 6 education in a Tamil school... Our client has truly learnt a hard and bitter lesson as a result of his foolish and wrongful actions."

In handing down the sentence, Judge Mesenas said: "Hope this will be a lesson for you."

For committing the offence under the Protection from Harassment Act, Elankovan could have been fined up to $5,000.