SINGAPORE - A 30-year-old man is expected to be charged tomorrow (Jan 12) over driving against the flow of traffic on Jan 5.

The incident took place around 1.25am, and the driver was believed to have travelled against traffic along the Ayer Rajah Expressway towards Tuas in a red sports car.

He was arrested on Jan 6 at about 6pm in the vicinity of Jubilee Road, and is also under investigation for drink driving.

There were 118 cases of reckless or dangerous driving in the first nine months of 2016, a drop from 189 in the same period the year before, said Traffic Police (TP) Commander Sam Tee on Wednesday (Jan 11).

TP added that they are investigating seven cases of driving against traffic flow from Dec 28 to Jan 7.

They will also look into improvements such as more visible markings on roads, in particular on areas where recent incidents took place. 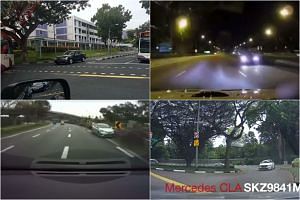 One driver arrested, 3 others assisting with investigations for driving against flow of traffic in recent incidents

In the latest case at Orchid Club Road around 5pm on Jan 7, a white Subaru crossed double white lines to go against traffic flow and made a right turn. TP said that "stern action" would be taken.

Addressing the media, Superintendent Lionel Bok, who is head of the investigation branch, added that although most cases were found to be unintentional,  "swift and stern action" would be taken would be taken for intentional cases.

SAC Tee added: "We do see that motorists have greater road sense, and there is less reckless or dangerous driving."

"is not a common occurrence", and where incidents arise from "wilful" acts, action will be taken.

He said the traffic police are also studying the possibility of deploying technology to detect vehicles moving against traffic, and reminded motorists to be "extra vigilant" at road junctions.

Under the Road Traffic Act, motorists convicted of dangerous driving may be fined up to $3,000 or jailed up to a year.

Repeat offenders may be fined up to $5,000 and jailed up to two years.