A man ran a company collecting public donations without a licence and failed to provide the necessary documents when ordered to do so by the Commissioner of Charities (COC). Cavin Tan Cher Kuan, 36, was sentenced to 16 weeks' jail and a fine of $2,000 yesterday.

This is believed to be the first case in which a person is convicted of an offence by not complying with the COC's order to provide information on a fund-raising appeal.

The Singaporean pleaded guilty to one count each of offences under the House to House and Street Collections Act and the Charities Act. He also admitted that he dealt with fake designer apparel and used criminal force on a police officer.

For one month, JCI would sell vouchers at $10 each that would entitle the buyer to a $50 discount at Spade Auto. JCI also employed at least five people, including Mr Jasper Phua Kian Wee, then 18.

On Nov 8, 2013, police received a call from Parkway Parade saying a group of youngsters was disturbing shoppers. A police officer spotted Mr Phua selling vouchers and the teenager said Tan had told him the proceeds would "go to charity, orphans and needy people".

The DPP told District Judge Ong Hian Sun that JCI did not have a licence to promote collections. Mr Phua was given a stern warning. 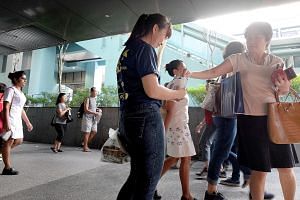 After this, JCI was renamed Alliance Career Entrepreneurship (ACE). Tan then persuaded non-profit organisation En Community Services Society (ECSS), which helps dysfunctional families, to enter into an agreement with ACE for a "fund-raiser" to be conducted between Feb 10 and May 10, 2014.

Under the agreement, ACE would donate between $3,000 and $5,000 to ECSS each month. Tan then obtained a house to house and street collections licence, which enabled the firm to solicit donations for ECSS.

DPP Benjamin said ECSS received many complaints about ACE's aggressive sales tactics. After the agreement expired, the police did not renew ACE's licence. No payments were made to ECSS, the DPP added.

On Oct 29, 2014, Tan was issued an order by the COC to furnish, by Nov 18 that year, documents relating to ACE's fund-raising activities. He failed to comply. Tan is out on bail of $15,000 and ordered to surrender himself on Feb 20 to begin serving his sentence.