SINGAPORE - A 63-year old man was charged in court on Wednesday (Nov 16) with rash driving along Ayer Rajah Expressway (AYE) and various other offences, including causing hurt to a motorcyclist and his pillion rider.

He allegedly drove his Toyota Camry along Jurong Town Hall Road without reasonable consideration for other road users by tailgating a motorcycle, cutting in and out of lanes and driving in an erratic manner.

While driving along the slip road to AYE, he allegedly drove in a manner so rash as to endanger another person's life, by veering to the right and coming very close to the motorcycle, causing the rider to ride on the extreme left of the road and almost hitting the kerb. 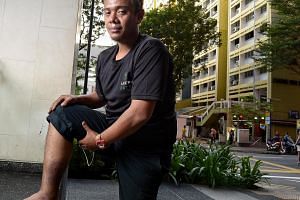 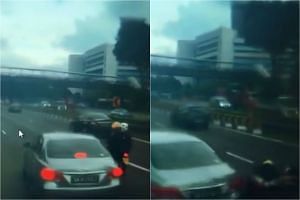 Ho then allegedly drove on the road shoulder in front of the motorcyclist, applying brakes intermittently and causing the rider to almost hit his car.

He is also accused of veering into the rider's path which resulted in a side swipe between the two vehicles, which almost caused the rider to fall. Ho allegedly drove alongside the motorcycle and swerved towards it too, but missed knocking the motorcycle down.

He is said to have intentionally hit the motorcycle and caused hurt to Mr Muhammad Fazly Rahmat, 29, and his pillion rider, Ms Siti Farina Saptu, 27, at around 11.30am.

Ho, represented by Mr Peter Low, will return to court on Dec 14.

A statement on Tuesday (Nov 15) said the Traffic Police takes a stern view of such dangerous road behaviour as it puts the lives of road users at risk.