SINGAPORE - A man who allegedly fired a flare into an Ang Mo Kio hawker centre earlier this week was charged in court on Friday (Sept 29).

Aw Chong Loong, 49, is said to have committed a negligent act by setting off a flare at Block 226C, Ang Mo Kio Avenue 1 at around 4.30pm on Tuesday.

He was arrested the next day.

Chinese-language daily Lianhe Wanbao reported on Thursday that the suspect was the son of the shop owner of a nearby medicine shop, and worked as a plumber.

An employee of a hawker stall at Kebun Baru Food Centre, who declined to be named, told The Straits Times that she witnessed his arrest.

A pipe-shaped object was fired on Tuesday afternoon into the Kebun Baru Food Centre located at Block 226H, Ang Mo Kio Avenue 1, and landed outside a stall, emitting sparks, smoke and fire. 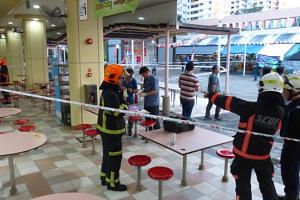 An area the size of a football field was cordoned off for six hours following the incident, with more than 50 police officers at the scene.

The Singapore Civil Defence Force said it was alerted to the incident at 4.40pm on Tuesday and sent a fire engine to the scene.

A police prosecutor on Friday asked the court for a week's adjournment pending findings from the Health Sciences Authority.

Aw, who was unrepresented, told District Judge Adam Nakhoda that he intends to plead guilty to his charge.

If convicted of negligent conduct with respect to an explosive substance, Aw can be jailed for up to a year and fined up to $5,000.

Police earlier said that no one was injured in Tuesday's incident.

Fruit stall owner Tan Yong Joo, 56, said he saw, at the time, a fiery object landing just outside his stall, after hearing a loud sound.

He proceeded to use a metal hook to move it away, worried that it might explode.

"I was scared to death," he told The Straits Times on Thursday.

Mr Tan said that he had tried to put out the fire with help from another hawker, but they did not know how to operate the fire extinguisher.

A foreign worker later managed to put out the flames.