SINGAPORE - After more than 20 years, a man who was allegedly involved in a case of armed robbery in Taman Jurong has finally been arrested.

On July 5, 1996, a then-43-year-old man was robbed while he was walking to his car after withdrawing money from the bank.

The victim was outside an OCBC branch near Block 65, Yung Kuang Road, when he was approached by two men armed with knives.

The pair robbed him of about $44,000 and fled on a stolen motorcycle.

Following investigations, the two men, who were 59 and 65 years old, were arrested and charged in court, while a third suspect remained at large, said the police in a statement on Wednesday (March 7).

On Monday, the man, now 59 years old, was arrested in Malaysia with the assistance of the Royal Malaysia Police (RMP).

He was subsequently extradited back to Singapore the next day. 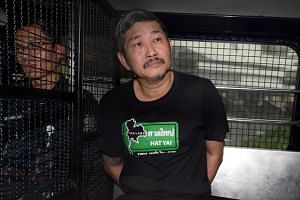 Man, who was arrested in Malaysia this week, charged with armed robbery in 1996

If convicted, he faces a jail term of up to 14 years and up to 12 strokes of the cane.

Deputy Assistant Commissioner of Police Julian Chee, who is deputy commander of Jurong Police Division, said: “The arrest and extradition of the suspect after 22 years on the run was made possible through the strong support of the RMP.

"I would like to thank the RMP for their efforts to locate and arrest the suspect. Through good partnership with foreign law enforcement agencies, the police will persevere and ensure that criminals are brought back to face justice regardless of how long it takes."