SINGAPORE - A man and a woman were arrested in two separate cases for their suspected involvement in credit-for-sex scams, the police said on Monday (Sept 16), even as the number of such cases has doubled from a year ago.

On May 18, the police received a report from a victim who said he had been cheated by a woman he had met on an online platform.

The woman had asked him to make an advance payment to a bank account in exchange for sexual services.

After the payment was made, the woman was no longer contactable.

On Sept 12, officers from the Woodlands Police Division arrested a 22-year-old man who is believed to have masqueraded as a woman on online platforms to cheat victims.

In a separate case, the police received a report of a similar cheating incident from a male victim on June 16.

The victim was asked to make an advance payment to a woman's bank account in exchange for sexual services. The woman was also not contactable after the payment was made.

Officers from the Woodlands Police Division identified a 34-year-old female suspect and arrested her on Sept 6. 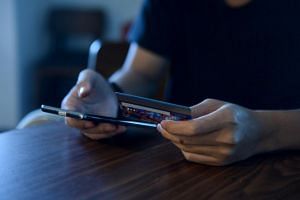 More scam victims in first half of 2019, especially for loan and credit-for-sex scams

Man saved from becoming credit-for-sex scam victim, thanks to police officers on patrol

The police said that the two suspects are believed to be involved in similar cases of credit-for-sex scams islandwide.

Those convicted of cheating may be jailed for up to 10 years and fined.

The recent cases come as credit-for-sex scams in the first half of this year more than doubled, compared with the same period last year.

The police said the total amount that victims were cheated increased by $636,000.

The police remind the public to be wary of friend requests from strangers on online dating or social media platforms that offer escort, massage or sexual services.