SINGAPORE - A 71-year-old man was charged in court on Friday (Nov 17) with harassing and assaulting a foreigner on board an MRT train in April 2017.

Gan Thean Soo is alleged to have used abusive words on Mr Joseph Flynn De Marini, 25 at about 8.30pm on April 19.

Five minutes later, he is said to have slapped the American on the left side of his head as the train was heading towards Farrer Park MRT station.

The third charge states that he caused annoyance by raising his voice at Mr De Marini during the train journey towards Farrer Park station.

Gan, who is represented by a lawyer, was remanded at the Institute of Mental Health for psychiatric observation.

He will be back in court on Dec 1. 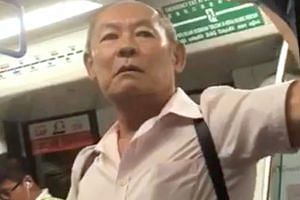 The incident was uploaded on Internet and went viral.

If convicted of harassment, Gan could be fined up to $5,000 and/or jailed for up to six months.

The maximum penalty for causing hurt is two years' jail and a $5,000 fine; and for committing public nuisance, a fine of up to $1,000.