SINGAPORE - A Malaysian man who pretended to be a reporter from Chinese-language evening newspaper Shin Min Daily News and cheated his victims in Singapore of $5,400 was sentenced to six months' jail on Friday (Sept 22).

A third cheating charge involving $500 was taken into consideration during sentencing.

Goh went to Tong Kee Cooked Food stall at Tiong Bahru Market on May 23 and told one of its owners, Mr Tan Shen Chang, 42, that he was a reporter from the publication.

He told Mr Tan that the dumpling soup sold at the stall had been selected for "certification" as it was "among the best in Singapore".

The court heard that Mr Tan runs the stall with his wife Tong Yiqin, and they have been selling roasted meat and Chinese dumplings for about three years.

He asked Mr Tan to prepare three dishes so that he could snap their photographs for a "review" the following day.

Goh returned to the stall on May 24 with a laptop, a tablet computer and a camera.

He told Mr Tan that he would take photographs of the dishes, interview the stall owners and write a review . Goh added that a "food recognition certificate" for 2017 to 2019 would also be issued.

Deputy Public Prosecutor Stephanie Chew said: "The accused further informed Tan and Tong that he would publish the said review on a website and requested a one-off payment of $2,900, purportedly as a maintenance fee for the website.

"Tan, believing that the accused was a journalist from Shin Min Daily News, agreed to make the payment."

After receiving the money, Goh told the couple that they could run a Google search for the review after June 3 this year as he would have posted the article by then.

He left the premises and did not respond to their subsequent attempts to contact him.

The court heard that Mr Yeo received a missed call from Goh on May 29 as the Malaysian had earlier visited his stall, claiming that it had been selected for a feature on a food lovers' website, Malaysiabest.my

When Mr Yeo returned the call, Goh lied that a company known as Alexis Food Industry was interested in entering into a franchise agreement with Xiang Lai and expanding its business across Kuala Lumpur.

Goh also informed Mr Yeo that there would be a profit-sharing arrangement and that Mr Yeo needed to prepare a franchise proposal in two days.

Goh offered to help him, claiming he had a friend who could help draft the proposal, which cost $2,800.

On June 3, Goh asked Mr Yeo to transfer $2,000 first and the latter did as directed. 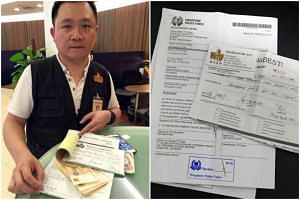 DPP Chew told District Judge Jasvender Kaur that Alexis Food Industry is a fictitious company. She added that Goh did not intend to procure a franchise agreement or proposal for Xiang Lai.

Goh has made full restitution.

For each count of cheating, he could have been jailed for up to 10 years and fined.