SINGAPORE - An Indonesian domestic worker, who was sent home by her employer, after allegedly being abused, testified on Tuesday (April 19) that she did not seek help at the airport as she was happy to be going home and had left the "devil's house''.

Before she was taken to the airport on Dec 19, 2012, Ms Khanifah, 35, said her employer, Zariah Mohd Ali, now 54, gave her a long-sleeve shirt, pants and a tudung to put on to cover the injuries on her head.

Zariah is on trial for 12 of 28 maid abuse charges. Her husband, Mohamad Dahlan, 56, is also accused of hitting Ms Khanifah with the cover of a frying pan.

Ms Khanifah said Zariah's daughter, Ms Atiqah, 18, made up her face and gave her a pair of powered glasses to wear to cover up marks on her face. She felt "groggy'' wearing them, she said.

The domestic worker added that Zariah gave her snacks, and 400,000 rupiah (about S$41) as transport expenses from Bandung to her village.

She testified that Zariah told her only the night before that she would be sent back. She had often asked to return home but Zariah told her to wait until her husband had enough money to send her back.

Asked by the prosecution why she was sent back suddenly, she said: "Because I was due for my second medical check-up.''

She said she did not ask for help from immigration officers at the airport as she was "already happy that I am going home and leaving the devil's house''. 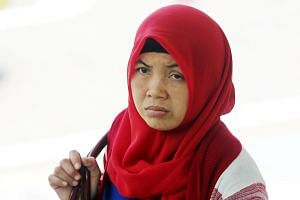 Maid 'hit with hammer' for not cleaning toilet properly

Ms Khanifah said when she arrived at Bandung Airport, she called her husband, who was surprised at her unexpected return. The couple took a bus to her village. She did not tell anyone about the "torture'' she endured.

But her mother noticed her head injuries the next day when her tudung fell off from her head while she was asleep. She told her mother what happened, and her mother contacted her (Ms Khanifah's) husband in Jakarta. The Indonesian maid agent was also informed.

Ms Khanifah was treated by a doctor for injuries to her head, back of her shoulders, forehead, ear, lips and hand. She borrowed from friends and relatives to pay for the medical fees. She also asked Zariah for money to pay the loan and for the medicine. Zariah sent her 1 million rupiah.

Ms Khanifah was later warded for 15 days in a hospital in Jakarta in early January 2013. The Singapore maid agent visited her in hospital.

Asked by Deputy Public Prosecutor Sharmila Sripathy-Shanaz how she felt about the way she looked now, she replied: "I feel sad.. because I am already deformed.''

The couple are represented by Mr Jayakumar Naidu.