SINGAPORE - A new law practice, with former Attorney-General V.K. Rajah among its practitioners, has been given seven days by the Law Ministry to clarify media reports that suggest it is an "annexe" or "local brand" of a London-based law firm.

This is contrary to the representations it has made to the ministry, the letter added.

The ministry had also issued a press statement on Thursday, saying the group is an association of Singapore-qualified lawyers.

However, on Tuesday (14 Nov), when the group announced its establishment in Singapore, the London-based Essex Court Chambers also announced on its website that Mr Rajah with Mr Tham Lijing, Colin Liew and Calvin Liang "have become members of Essex Court Chambers, practicing as full-time independent advocates". 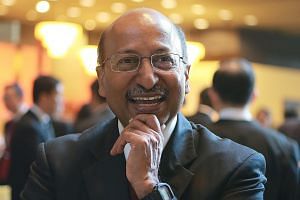 They are understood to be the first Singaporean quartet to be admitted as members of a prominent law chambers group in the United Kingdom.

Under the English chambers model, individual specialist lawyers who have their own practices come together to form an association under one roof, and they share overhead costs.

Their move led to media reports that "both surprised and concerned'' the ministry.

The ministry stressed it "has not approved any of this".

"This is again contrary to both the rules in Singapore and the confirmations given to the ministry."

It also told The Straits Times that the clarifications sought by the ministry “are being given and we are glad to have the opportunity to do so’’.