SINGAPORE - A 60-year-old landscape technician who perforated bus seats with three toothpicks on each of four occasions was fined a total of $3,600 on Monday (Nov 6).

Lim Lye Seng was also ordered to pay compensation of $325.91 for the damage caused.

If he cannot pay the fine, he will serve eight days' jail in default.

Lim had admitted to two counts of mischief on board SBS Transit service 123M on July 22 and Aug 4 with two other similar charges taken into consideration during sentencing.

District Judge Lim Keng Yeow told Lim that he wanted to make it very clear that he was not imposing a jail sentence not because his actions were acceptable and excusable.

"No one should be excused for doing these things, especially not someone like you, a 60-year-old," he said.

The court heard that Lim was eating fishball noodles at a coffee shop opposite Tiong Bahru MRT station on Aug 4 when he took three toothpicks from the stall.

He boarded the bus at around 6.20am. While the bus was travelling along Lower Delta Road, he perforated the seat next to his and placed the three toothpicks into the seat, with the sharp end pointing upwards.

The driver completed the trip at around 6.40am and parked the bus at HarbourFront Bus Interchange.

While checking the vehicle, he found the toothpicks and informed an SBS Transit operations officer, who then alerted the police. 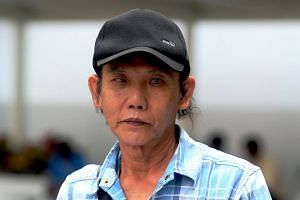 In the course of investigation, Lim admitted to doing the same thing on three separate occasions in July.

On July 22, he was on board the bus on his way to work when he perforated the seat next to him.

"The accused admitted to committing the offences because he was bored and he wanted to play a prank on others. He further admitted that he was aware that his actions could have caused hurt to passengers on board SBS bus 123M," said Deputy Public Prosecutor Rimplejit Kaur.

Lim, who is married with two children, could have been jailed for up to a year and/or fined on each of the two charges.