SINGAPORE - Two brothers flung Molotov cocktails at a bar in St James Power Station after bouncers told the older sibling and his friends to get out of another nightspot in the vicinity following a dispute in 2016.

The pair, who committed the offence with three friends, had earlier pleaded guilty to one count each of committing mischief by fire. Cephas Ho had also admitted to consuming cannabis and being in possession of the drug.

Two of their friends were dealt with in court in March.

Bryan Ho and his friends went to Club Hollywood Thai disco in St James Power Station on Sept 12, 2016, but bouncers threw them out after they had a dispute with another group of clubbers. Court documents did not reveal details of the dispute.

Bryan Ho told his brother about what happened and decided to throw Molotov cocktails at Club Hollywood. The brothers' three friends also agreed to take part in the attack. 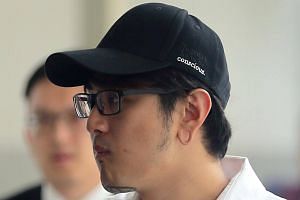 Assistant Public Prosecutor Dillon Kok said that Tay and Toh remained in the car while the three others alighted, bringing four Molotov cocktails that had socks as wicks.

"The trio climbed some railings to St James' carpark, where they hid behind some parked cars. There, they realised that their intended target, Club Hollywood, was quite a distance from where they were positioned.

"As such, they decided to throw the Molotovs at the outlet closest to the carpark... This outlet was Postbar," added the APP.

After setting fire to the wicks, they threw the Molotov cocktails at the nightspot, creating a "ball of flames" as the bottles shattered when they hit the floor.

After that, the men ran to the car and fled. The court heard that bouncers managed to put out the fire and all five men were later arrested.

Cephas Ho, who was caught at his Marine Parade Road home on Sept 13, 2016, had a packet of "vegetable matter" in his possession which was later found to contain cannabis.

His urine samples also contained traces of cannabis, and he admitted that he had consumed the drug about a week before his arrest.

Cephas Ho is now out on bail of $20,000 while his older brother's bail was set at $15,000. They will surrender themselves at the State Courts on June 21 to begin serving their sentences.

Offenders convicted of committing acts of mischief by fire can be jailed for up to seven years and fined.