His offences came to light when police arrested one of the women for vice-related activities on May 31, 2017, and his messages were found on her mobile phone.

On Wednesday (Jan 2), District Judge Jasbendar Kaur said Chin had committed an "extensive abuse of power and trust" before sentencing him to three years' jail.

The ICA staff sergeant pleaded guilty on Dec 28 last year to three offences under the Official Secrets Act and two counts of corruption.

He also admitted to five counts of obstructing the course of justice.

Chin, who has been with the ICA since February 1998, has been interdicted from service since June 15, 2017. 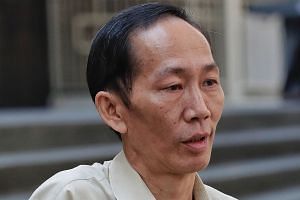 Deputy Public Prosecutor Loh Hui-Min told the court that Chin met the women some time between end-2016 and early 2017 while conducting operations to arrest immigration offenders.

The trio had been arrested for various immigration offences and were on Special Passes pending the conclusion of their cases.

Chin told them he could have their Special Passes extended and claimed this would let them remain in Singapore after their matters were concluded.

Some time in 2017, he contacted one of them for a massage, hoping to get a discount for her services. She agreed and they met in Geylang.

They had sex after the massage and Chin offered to pay her but she rejected the payment.

The court heard that he contacted her for another session about a month later.

Chin also made similar requests to another woman and received free services from her on two separate occasions.

The ICA was alerted after Chin's messages were later found on one of the women's mobile phone.

After an interview with his management, he deleted the messages he had exchanged with the three women.

Court documents did not reveal the outcome of the trio's cases.

In a statement, the ICA had said it takes a serious view of errant officers.

Its spokesman added: "ICA officers are expected to discharge their duties professionally and maintain a high standard of integrity. Officers who break the law will be dealt with, in accordance with the law.

"Following the officer's conviction in court, we will commence civil service disciplinary proceedings against him with a view to dismiss him from service."

For each count of corruption, Chin could have been jailed for up to five years and fined up to $100,000.