SINGAPORE - A housewife, whose maids were spotted last year perched on a two-storey scaffold while working on the facade of her Cluny Park house, was fined $46,000 on Wednesday (Aug 8).

Singaporean Willow Phua Brest, 46, pleaded guilty on Tuesday to four counts of failing to provide safe working conditions for her two Indonesian helpers, Ms Karsinah, 39, and Ms Dati, 43. She also admitted that she had unlawfully asked Ms Karsinah to perform tasks as a scaffolder and maintenance worker, the court heard.

The Straits Times understands that this is the first case in which a person is convicted for breaching work pass conditions involving the work safety of maids, after the Employment of Foreign Manpower Act was amended in 2012 with enhanced penalties.

Ministry of Manpower (MOM) prosecutor Shanty Priya said that the scaffold was erected at Brest's house on Oct 9 last year so that the second-storey windows could be cleaned.

The housewife then allowed her two maids to climb onto the structure and stand on it to clean the windows.

The Indonesians performed the task on Oct 11 and 13, with the help of safety belts, masks, gloves and an extended wiper.

However, Ms Shanty told District Judge Adam Nakhoda that the safety belts Brest provided were not sufficient to prevent or reduce the severity of injuries to the maids if they slipped off the scaffold. The prosecutor also stressed that the Indonesians were not trained to work at height.

That same month, Brest asked contractors to set up another scaffold at the back of her house for maintenance work. They declined to do so and instead, delivered to her home components for an unerected scaffold.

Investigations revealed that Brest then asked Ms Karsinah to perform tasks as a scaffolder and maintenance worker. However, the maid's work pass did not permit her to perform these tasks.

On Oct 20 last year, Brest asked Ms Karsinah to help her erect the scaffold and they took about three hours to set up the structure which was about 4.5m high.

After assessing that the scaffold was stable, the housewife asked Ms Karsinah to stand on it to sand, varnish and paint a wooden wall at the back of her house.

Ms Shanty said that the scaffold did not have required features such as proper guardrails.

In mitigation, defence lawyer Shashi Nathan told the court that there was no evidence that his client had forced the maids to step onto the scaffold. He also said that Brest had a good relationship with the maids.

The two women are no longer working for Brest. Ms Dati has since returned to Indonesia while Ms Karsinah is now working for another household here.

In a statement on Wednesday, MOM said that an employer has a legal obligation to provide safe working conditions, and ensure that the foreign domestic worker carries out her task in accordance with safe work practices as stipulated by the ministry.

Commenting on Brest's case, director of well-being at MOM's foreign manpower management division Jeanette Har said: "Lives and limbs are at stake here. This is an egregious case. The risks are real and obvious but the employer was oblivious to them.

"We will take stern actions against employers who do not take their responsibilities seriously, especially so when it comes to the safety of their foreign domestic workers."

In a similar case, a 35-year-old woman has been taken to court after she allegedly failed to provide safe working conditions for her maid between early June and July 4, 2017. 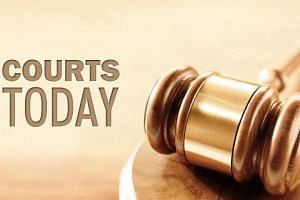 Woman, 36, charged after maid cleans glass ceiling of Goldhill Avenue home by standing on it

Belinda Huber, also known as Belinda Tran, is accused of asking Ms Taculad Rose Mae Mata to clean the glass ceiling at the second storey of her Goldhill Avenue house, off Dunearn Road. She allegedly asked the maid to do so on four separate occasions.

The maid's nationality and her age were not stated in court documents.

Huber, who faces one charge, first appeared in court in May and will be back on Aug 16.

If convicted of committing the offence under the Employment of Foreign Manpower Act, she can be jailed for up to a year and fined up to $10,000.