SINGAPORE - A male nurse was sentenced on Thursday (Sept 26) to 10 months' jail and three strokes of the cane for molesting a hospital patient under his care.

The 26-year-old, his former workplace and the victim's identity cannot be revealed owing to a gag order. He is no longer working as a nurse.

At around 6pm on Aug 28 last year, the 24-year-old woman, who was in hospital seeking treatment for kidney stones, pressed a button to call for assistance. She wanted to talk to someone about her depression, which she was also suffering from.

The man, who was the nurse in charge of her room, attended to the woman.

He held her left hand while he spoke to her, using his other hand to touch her forehead, the court heard.

Then he molested her.

"The victim was in shock and did not know what to do."

The DPP added that when a female nurse suddenly entered the room, he retracted his hands and moved them to the patient's stomach. 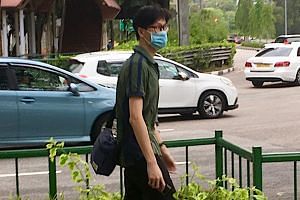 He then asked his victim if she felt any pain in the area, only to continue molesting her again once his colleague had left the room.

The DPP said: "(He) asked the victim how she felt and if she needed him to massage any other parts. The victim said no.

The court heard that the woman needed some time to compose herself before telling a female nurse about her ordeal.

The police were alerted at around 1pm the next day.

For molesting the woman, he could have been jailed for up to two years and fined or caned.