Parents encouraged by move, but some say more should be done for young suspects

Having an Appropriate Adult (AA) present during police interviews has proven to be "more comforting" for vulnerable suspects, said Mr Keh Eng Song, chief executive of the Movement for the Intellectually Disabled of Singapore (Minds), which runs an AA scheme for people with mental disabilities.

From April, a similar scheme for young suspects aged below 16 will be rolled out in phases, the Ministry of Home Affairs announced yesterday.

"A volunteer is there to make sure the suspect understands questions being posed by the investigation officer (IO) and, similarly, when the answer is given to the IO, the IO understands too," said Mr Keh.

When the statement is recorded, the volunteer will confirm that it is recorded accurately. "They are not supposed to counsel or say anything, but ensure that the suspect is saying the truth," said Mr Keh.

Besides him, other experts and parents also welcomed the new scheme for minors, though some say more can be done. 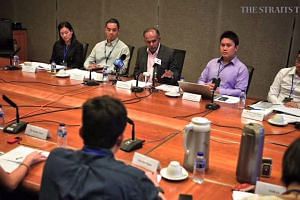 A volunteer is there to make sure the suspect understands questions being posed by the investigation officer (IO) and, similarly, when the answer is given to the IO, the IO understands too.

Under the new scheme, young suspects will be accompanied by trained, independent volunteers during interviews in criminal investigations. This was an outcome of a multi-agency review of young suspects under criminal investigation, after the death of Benjamin Lim, 14. On Jan 26 last year, he was found dead at the foot of the block where he lived, hours after being questioned by the police over an alleged molestation case.

Veteran lawyer Amolat Singh called the scheme a "step in the right direction". But there may be gaps in the handling of suspects that will need to be addressed, he said.

This includes whether to allow a minor to be alone in a police car with officers. "If such a gap exists, then the effectiveness of the AA will be reduced," he said.

"One way is to have the AA come along with them when they pick up a suspect," he added, although it may be challenging to coordinate this with police operations if officers are taking suspects to the crime scene before taking statements.

AAs in the Minds scheme have been involved outside the interview process, and have been present even at the incident scene, said Mr Keh, adding: "When the suspect needs to be brought down to the incident scene to re-enact certain things, the IOs may also bring the AA down."

Mr Alfred Tan, chief executive of the Singapore Children's Society, foresees a challenge in mobilising volunteers for the new scheme, which would require a large pool.

"How many volunteers will wake up in the middle of the night to attend to police cases?" he said.

He added that while it is suitable to involve volunteers in "straightforward cases" like petty crimes, more complex ones "may require someone more well trained to come on board", such as a counsellor.

While some parents said they are encouraged by the move, others noted that a familiar face might go a long way in giving reassurance.

Project manager Victor Foo, 44, said: "Ideally, it should be someone they are familiar with, such as a teacher or even school principal rather than a stranger."

But he remains concerned about school protocols. "(The authorities) should still wait for the parents to arrive at school, although it may be hard if they are working," said Mr Foo, who has three children aged between six and 10.

When contacted, Benjamin's father, who declined to give his full name, said having an AA present is beneficial not just to suspects, but also parents like himself. "If someone neutral came to tell me that the police were civil, stern, but did not raise their voice... it gives me more assurance that my son, in his last moments, was not in any way mistreated," said the 48-year-old.

However, he expressed concern that the police have the discretion in deciding if an AA should be called. "What if the police decide that it is not appropriate? The young suspect will still be there alone, like Benjamin was."

But he conceded that the scheme is not a foolproof solution to prevent youth suicides. "Nobody can guarantee what is going to happen next, not even the ones closest to a child."