Former Georgian prime minister Bidzina Ivanishvili failed to have a lawsuit against a Swiss bank involving a US$1.1 billion (S$1.5 billion) trust heard in a court in Singapore instead of Geneva.

Mr Ivanishvili, 62, his wife and three children had sued Switzerland-based investment bank Credit Suisse and trustee Credit Suisse Trust in the High Court, over losses to the Mandalay Trust, of which they are the beneficiaries.

Both the bank and trustee applied last November to stop the court proceedings here and have the case heard in a Swiss court instead - which, they argued, was more appropriate.

Mr Ivanishvili - who was elected prime minister of the former Soviet republic of Georgia in October 2012 and stepped down a year later - is said to be Georgia's richest man and worth US$4.6 billion, according to Forbes.

He settled about US$1.1 billion in the Mandalay Trust in Singapore in March 2005, with the assets held by two investment firms, Meadowsweet Assets and Soothsayer.

The trust assets were managed and invested by the bank, which provided investment reports detailing the performance of the accounts to the trustee. The Geneva branch was the centre of management for the portfolio. 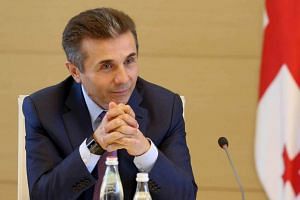 Credit Suisse sued by billionaire in Singapore and New Zealand

Between September and October 2015, the bank issued margin calls totalling US$41.01 million on accounts within the Mandalay Trust. The calls were sparked by the drop in the value of the trust fund from US$697.68 million in December 2014 to US$437.8 million in September 2015.

Mr Ivanishvili claims that in the process of following up on these margin calls, he discovered misconduct on the part of his portfolio manager Patrice Lescaudron.

Lescaudron was convicted of embezzlement, forgery and other charges in a Geneva court last year and jailed for five years.

In a lawsuit last August, the plaintiffs sought to find the bank liable to account for losses to the Mandalay Trust, among other things.

But the defendants successfully applied for the case to be heard in a Swiss court.

The bank was defended by Senior Counsel Harpreet Singh Nehal, Mr Jordan Tan and two others, while Senior Counsel Stanley Lai, Mr Kenneth Lim and three others acted for the trustee.

In judgment grounds issued last month, Justice Valerie Thean wrote that issues such as the governing laws of the country, the location of the witnesses, documents and evidence, the need to find a trial venue that better secures a just trial, and the overall nature of the litigation are important factors in this case.

Justice Thean said: "The claim is essentially one framed against the bank for conduct wider than the Mandalay Trust."

She added that the "site" of the events "surrounding the claims against the bank is Geneva, and ought to be tested in Geneva".

Justice Thean ruled that Geneva was the most suitable forum for the case to be heard.

Dismissing the appeal, she said: "Having regard to all the circumstances, it is fair to conclude that the trust relationship was the ancillary relationship, and the banking relationship in Geneva was the primary one."