SINGAPORE - A director of a chiropractic firm provided false reports on 12 patients' conditions and worked with two financial advisers to try to dupe the pair's company into paying out more than $17,000 in fraudulent claims.

The court heard that insurance firm Manulife Singapore was then cheated into disbursing $4,450 in total.

Charles Loo Boon Ann, 30, who was a director of the Chiropractic Focus Group (CFG) but is now its shareholder, was sentenced on Tuesday (Aug 6) to eight months' jail. He pleaded guilty to six cheating charges involving $4,250 and six patients.

Another 11 similar charges linked to the remaining amount and six other patients were considered during sentencing. He committed the offences between 2017 and last year.

His alleged accomplices are Priscilla Tien Ling, 27, and Mike Chew Jun Yong, 37, whose cases are still pending. A search on the General Insurance Association Of Singapore's website reveals no information about the pair.

Deputy Public Prosecutor Eugene Sng told the court that the three Singaporeans knew one another in early 2017 and discussed ways they could work together in their respective businesses.

The DPP said they then agreed on a plan in which Loo would refer patients seeking treatment at CFG for pre-existing conditions to the pair.

According to court documents, as part of the ruse, Tien and Chew would then sell Manulife personal accident insurance policies to these patients.

The patients would then return to CFG and claim the cost of treatments against the policies they had purchased. 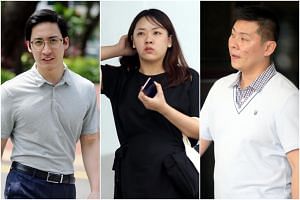 DPP Sng told District Judge Carol Ling: "The accused and co-accused persons were aware at all material times that the Manulife personal accident insurance policies did not cover pre-existing conditions and that the cost of the patients' treatment at CFG therefore could not be claimed against the policies. Nevertheless, the accused and co-accused persons facilitated claims made by the patients."

On Feb 27, 2017, Ms Tan Bee Ai visited CFG's outlet in Tampines Central for pre-existing back pain and Loo attended to her.

She returned about two months later and he advised her to sign up for a $2,000 treatment package.

When she told Loo she found this expensive, he advised her to sign up for an insurance policy and she could then claim for the cost of her treatment.

When she agreed, Loo forwarded her details to his two alleged accomplices. Tien later contacted Ms Tan who signed up for a Manulife insurance policy and its inception date was April 28, 2017.

About two months later, Loo prepared a medical report falsely stating that Ms Tan had suffered lower back pain and stiffness after she fell in her kitchen in May that year .

The DPP said Tien then submitted a personal accident claim form to Manulife on July 6, 2017, which contained this bogus information.

The claim was also submitted with a CFG invoice dated June 17 that year which stated that Ms Tan's treatment had cost $1,000. Manulife eventually paid Ms Tan $1,000 for this claim.

The court heard that Loo, Tien and Chew also used a similar method to dupe the insurance firm on five other occasions.

These cases involved CFG's other patients, identified as Ms Tan Sook Koon, Ms Goh Keng Lian, a 13-year-old boy who cannot be named due to his age, as well as a husband and wife pair, Mr Choo Joon Hin and Madam Lee Seow Joo.

It was not mentioned in court if these patients were aware that they were involved in a scam.

On Tuesday, DPP Sng said Loo had played a "crucial role" in the ruse and urged the judge to sentence him to eight months' jail.

Loo was represented by lawyers Ravinderpal Singh and Trent Ng who pleaded for a four-month jail term.

In their mitigation plea, the lawyers stressed that their client had attempted to offer full restitution to Manulife.

They added: "Restitution was not made in the present case only because of Manulife's persistent refusal to accept any restitution from the accused."

For each count of cheating, Loo could have been jailed for up to 10 years and fined.