A Frenchman and a Romanian almost got away with an alleged scam but for the quick action of the police and Immigration and Checkpoints Authority (ICA).

It started with Oceanic Group, which has offices in Singapore, Hong Kong and Shanghai, being duped into believing someone in France wanted to buy one of its vessels. Court documents did not provide details of the vessel or the deal.

The cruise and leisure company's founder and managing director, Mr Daniel Chui Mun Yew, then travelled to France to close the deal. By then, Oceanic Group had already been paid a deposit.

Police said while Mr Chui was there on Saturday, Frenchman David Weidmann, 36, and Romanian Iosif Kiss, 39, allegedly turned up at the company's Singapore office on the same day at 7.40pm to collect $1.5 million. They said it was their commission for the deal.

The transaction was authorised and the men walked out with the sum. Around 20 minutes later, in France, Mr Chui learnt that the deposit had been paid with counterfeit money.

The police said: "At the time of the transaction in France, two men were in Singapore to collect a sales commission for the sale of the vessel. When the victim discovered the fraud, he immediately informed his Singapore office to stop the sales commission." 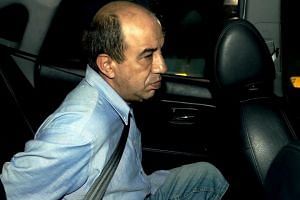 But Weidmann and Kiss had already left with the money.

Soon after a police report was made, officers from Clementi Police Division established the identities of the two men. They then notified ICA and all exit points were alerted. Within three hours of the police report, the two men were arrested at Woodlands Checkpoint.

They are now remanded at the Central Police Division and face one charge of cheating.

Yesterday, the court heard that $400,000 of the $1.5 million was recovered. The two men will be back in court next Monday. Offenders convicted of cheating can be jailed for up to 10 years and fined.

Oceanic Group has been involved in a number of significant projects in the industry. On its website, it revealed its plans to convert the Queen Elizabeth 2, a well-known ocean liner, into a luxury hotel. It is working with the Dubai government on the project.

It was established in 2009 and has its headquarters in Singapore.