He says Fridae.com founder, who is on trial for drug trafficking, sold him drugs on multiple occasions

On the first day of Koe's drug trafficking trial, Malaysian Yeoh Kim Koon said that Koe, now 45, sold him Ice priced at either $100 per gram or $120 for the same amount.

The court heard that Yeoh was Koe's sexual partner from July to August last year.

Yeoh, who worked as a Chanel beauty adviser, told the court that he is also known as Eric. He added that Koe had also sold him another type of drug known only as "G", which cost $300 for 100ml.

Koe, who is also the managing director of local pharmaceutical firm ICM Pharma, is on trial for one count of drug trafficking. He allegedly sold Yeoh one packet of crystalline substance containing 0.17g of Ice for $240 on Aug 25 last year. Koe is accused of committing the offence in his Spottiswoode Park Road home at around 7.30pm that day.

He has five other drug-related charges against him for offences including methamphetamine consumption and possession. They have been stood down and will be dealt with at a later date. 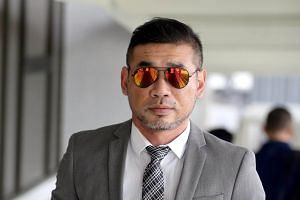 Deputy Public Prosecutor Wong Woon Kwong told the court yesterday that Yeoh was arrested in his Compassvale Street flat at around 7.20am on Sept 15 last year. Koe was arrested a week later.

Yeoh had pleaded guilty to offences including methamphetamine consumption and possession on May 31 this year. He was later sentenced to 16 months in jail.

He told District Judge Olivia Low yesterday that he first met Koe about eight years ago at a gym, but they started communicating only in July last year after a mutual friendintroduced them. They became sexual partners soon after.

Yeoh said he was already consuming Ice last year before being introduced to Koe. He would consume the drug with "Internet friends" he made on Facebook and gay dating app Grindr.

After they were introduced, Yeoh said he bought Ice from Koe and used the app Line to send messages from his mobile phone to Koe whenever he needed drugs. He would then go to Koe's home to collect them. Security camera footage taken from the ground floor lift lobby of Koe's apartment building at around 7.30pm on Aug 25 last year was played in court yesterday.

DPP Wong saidYeoh went upstairs, where he met Koe in his home. Yeoh left the unit at about 7.50pm the same day. Yeoh said that he cannot recall what happened in the time that elapsed, but said this was the last time he obtained Ice from Koe.

During his cross-examination, Koe's lawyer, Mr Sunil Sudheesan, highlighted that the two men had stopped contacting each other after Sept 4 last year as Koe "did not like people sticking to him". Yeoh said he was "a bit disappointed" at this turn of events but was not sad as they were only sex partners.

When Mr Sudheesan asked Yeoh if he had accused Koe of giving him drugs to cover for the other people who had given him narcotics, the Malaysian replied: "No."