Deputy Prime Minister Heng Swee Keat has filed a police report over a Facebook post that carried a false headline along with his photo.

The post appeared to be a sponsored one by Facebook page Well Vacation, entitled The Nation Says Goodbye To Finance..., with the remainder of the text cut off.

The fraudulent post also featured a photo of Mr Heng speaking at the World Bank-Singapore Infrastructure Summit. It was captioned: "You can take a HUGE advantage of this program."

The Sunday Times searched for Well Vacation's Facebook page, but could not find it. However, an article on a website with the same name was found, titled The Nation Says Goodbye To Finance Minister Heng Swee Keat.

The article on the website used a photo of the Singapore Exchange and replicated a Straits Times article on an unrelated topic.

Mr Heng wrote: "While the link reproduced a Straits Times article word for word, it carries a false headline, and the Facebook post is heavily misleading. It is obviously fake news. I have made a police report." 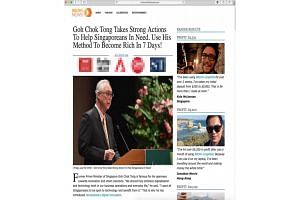 He added that there were websites fraudulently using the names and photographs of ministers and other prominent personalities, and urged the public to be wary of posts from such dubious sources.

He said that members of the public should not respond to such websites, especially when they ask users for personal information such as e-mails, passwords, or credit card information.

It also noted that there have been other websites that fraudulently used the names and photos of ministers, including MAS chairman and Senior Minister Tharman Shanmugaratnam, and other public figures to solicit bitcoin investments.

One such figure was Speaker of Parliament Tan Chuan-Jin, who posted on his Facebook page on the same day saying a fraudulent website had used his name to solicit investments in cryptocurrencies.