She was regularly seen around the neighbourhood on her bicycle and would often greet neighbours.

But on Thursday evening, tragedy struck when Ms Wong Lai Cheng, 47, was killed after being hit by a private bus along Pioneer Road North while cycling home from Nanyang Technological University.

Ms Wong, who lived about 2.2km away from NTU, worked as a hall operations assistant there.

The horrific accident was captured by multiple in-car cameras, with the footage shared on social media. It showed a private bus careening down a slip road and hitting Ms Wong.

The bus then crashed through the road divider and hit several cars, including a white BMW, before coming to a stop.

The accident took place around 6pm, and Ms Wong was declared dead on the scene by paramedics, said a Singapore Civil Defence Force spokesman. Ms Wong's husband and teenage daughter rushed to the scene, and the distraught pair were seen being comforted by relatives.

A neighbour of hers told Lianhe Wanbao that Ms Wong was a kind woman who often bought leftover produce from a friend who sold vegetables to give to others. She was also an optimistic person, said the neighbour.

When The Straits Times visited Ms Wong's home yesterday evening, her nephew, who declined to be named, said the family was still in shock. "It was her usual route home from work. It is so sad that she is gone just like that," he said.

The BMW driver, who gave his name as Mr Salim, told Shin Min that the bus driver apologised to him and said his brakes were spoilt.

A police spokesman said the 29-year-old bus driver was arrested for causing death by a negligent act.

The Straits Times understands that the driver, an Indian national, is out on bail and assisting police in investigations.

He had been working for Johnson Transport and Trading for less than two months, the firm's management said. Before that, he had driven a lorry for nine years in another Singapore company.

The firm, which has a fleet of more than 50 buses, provides school bus services and transportation for office staff. An employee of the company told Shin Min that the driver had been suspended from duty and the 45-seater bus he was driving had passed previous vehicle inspection checks. 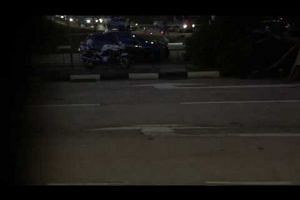 At the time of the accident, the bus had been heading from Lot One in Choa Chu Kang to pick up workers from a shipyard and no passengers were on board, Shin Min reported.

A driver in his 40s at Johnson Transport, who gave his name only as Mr Yang, told ST that new drivers usually received on-the- job training.

Mr Yang, who has been with the firm for four years, said that every driver also had the responsibility to check his own vehicle before leaving the bus yard in Toh Tuck Road.

Correction Note: An earlier version of the story quoted a report that said Ms Wong had cancer. It has come to our attention that this is incorrect. We are sorry for the error.