SINGAPORE - A married couple repeatedly abused their maid, caning and kicking her and force-feeding her a mixture of rice and sugar before ordering her to eat her own vomit when she threw up.

On one occasion, Myanmar national Moe Moe Than, 32, was forced to perform her chores clad in only her bra and short pants.

She was also told that an assassin would be hired to kill her family members back home.

District Judge Olivia Low sentenced her husband, Tay Wee Kiat, 41, who used to work as a regional IT manager, to two years' jail, and ordered him to pay a compensation of $3,000.

After a 31-day trial, the judge convicted the couple on March 4 of maid abuse.

Chia was convicted of eight assault charges and one count of using abusive words towards the maid. 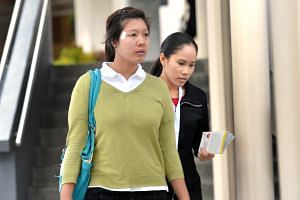 Couple abused maid who was caned, given insufficient food and forced to eat own vomit

The judge also found the mother-of-three guilty of six offences under the Employment of Foreign Manpower Act.

These included forcing the maid to perform her chores scantily clad and failing to give her enough food.

The Myanmar national started working at the couple’s Yishun home on Jan 8, 2012.

When she told Chia that she had not been given enough food, her employer wedged a funnel into her mouth and force-fed her until she threw up. The maid was then ordered to eat her vomit and she complied.

She added: “The deprivation of a basic human right to manage one’s bodily functions strikes at the core of one’s dignity... and constituted ill treatment.”

Chia had also ordered the maid to strip from the waist down before caning the latter’s bare buttocks.

The judge said that this was a “humiliating mode of punishment”.

Tay abused Ms Moe Moe Than through acts such as caning and kicking her while she was in a “push-up position”. He also used a broomstick and metal clothing hook to hit her.

The offences came to light when Ms Moe Moe Than returned to Yangon on Nov 12, 2012, and told her Myanmar agent about her plight.

Singapore’s Ministry of Manpower was later alerted and it arranged for her to return here about a month later. The maid later testified in court and told Judge Low about her ordeal.

The judge convicted the couple after the trial but she also acquitted them of two charges each.

Chia had been acquitted of failing to ensure that all outstanding salaries due to Ms Moe Moe Than had been paid before her repatriation.

Tay, on the other hand, had been acquitted of instructing their other maid, Ms Fitriyah, 34, to hit the Myanmar national.

On Monday, Deputy Public Prosecutor Kumaresan Gohulabalan said the prosecution will be appealing against the acquittals.

Defence lawyer Wee Pan Lee told the court that his clients have not decided on whether to appeal against Judge Low’s decisions.

The couple have been released on bail of $15,000 each and if they decide not to appeal, they will surrender themselves at the State Courts on March 27 to begin  serving their sentences.

Prior to the trial involving Ms Moe Moe Than, the couple had been taken to court for abusing Ms Fitriyah, who goes by only one name.

In March 2017, District Judge Shaiffudin Saruwan sentenced Tay to two years and four months’ jail for abusing the Indonesian maid. Chia was given a two-month jail term for assaulting her.

Both the prosecution and the defence later appealed against Judge Shaiffudin’s decisions.

The couple remained free until the second trial, which concerned the abuse of Ms Moe Moe Than.

With an upcoming appeal involving Ms Moe Moe Than’s case, the High Court will decide in the future on how the sentences for the cases involving both maids would be served.

This will take place after the appeals involving the Myanmar national’s cases are concluded.