SINGAPORE – A police officer, who admitted in a district court last month to being a senior member of a secret society and the headman of a motorcycle gang, was sentenced to a jail term of one year on Wednesday (June 20).

Umar Hassan, 38, a senior staff sergeant attached to the Singapore Police Force’s Ang Mo Kio Division, pleaded guilty to two counts of being a member of an unlawful society. Two other charges for similar offences were taken into consideration during sentencing.

Before handing out the sentence, District Judge Jasvender Kaur said: “Such unlawful societies which are prejudicial to public peace and public safety have no place in our society. Acting as a member of a secret society is therefore inherently harmful.

Umar had been a policeman for about 18 years since joining the police force in 1999, the court heard.

He  set up his motorcycle group with three others in 2001 and was later recruited into and made a senior member of another gang six years later.

Umar was arrested on Nov 18, 2016, after police learnt about a video clip which showed a group of men chanting gang slogans at a wedding.

He was in a Whatsapp chat group of the motorcycle gang and was aware that his gang members were providing escort for the wedding as the matter was discussed in the chat.

His Facebook page, laptop and mobile phones were later found to contain pictures of him displaying a hand sign to show that he was a gang member. Umar has been suspended from service in the police since Dec 14 last year.

Umar is out on bail of $5,000 to settle personal matters and has to surrender himself at the State Courts on July 4. 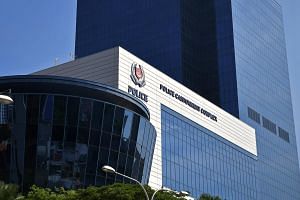 In a statement earlier this month, the police said that it has reviewed its screening processes for future potential officers.

Without revealing details, it added that the force conducts vetting on shortlisted applicants for police jobs.

A police spokesman said: “Notwithstanding these measures, we recognise that we may not always detect the adverse background of all the applicants... The Singapore Police Force has also reviewed our screening processes to minimise the possibility of similar cases from falling through the gaps again in future.”

The police also said that after Umar’s gang affiliation was discovered, officers conducted extensive investigations into his history, the extent of his secret society involvement, and whether he had attempted to recruit his colleagues.

The spokesman added: “We also thoroughly examined the information which he had access to and whether he had used it in a manner prejudicial to the Singapore Police Force, and law and order. Based on our investigations so far, there is no indication of such abuse.”

On Wednesday, police said that they are commencing disciplinary proceedings against Umar, “with a view to dismissing him from service”.

In another case of a policeman with gang links, Muhd Firdaus Abdullah, 20, who had been doing his national service with the police, was jailed for six years and two months with five strokes of the cane on May 30.

He had pleaded guilty in April to offences including harbouring an alleged murderer – Muhammad Khalid Kamarudin, 22.

Both Firdaus and Khalid were members of the same secret society. Khalid’s case is still pending. The two men and Umar belonged to different gangs.