But when cross-examined by defence lawyer Sunil Sudheesan, investigating officer Inspector Parthiban Mathevanan testified that he was unable to establish the source of Yeoh's drugs prior to meeting Koe, who founded the lesbian, gay, bisexual and transgender news and social networking site in 2000.

On the second day of Koe's drug trafficking trial, Insp Parthiban added: "(Yeoh) didn't reveal any information on the people he got the meth from. He only told me about the accused...I can't confirm if (Yeoh) was covering up for someone."

Yeoh is also known as Eric and had worked as a Chanel beauty adviser in VivoCity.

The Malaysian, who is currently serving a 16-month jail sentence after pleading guilty on May 31 to drug-related offences, had testified on Thursday that he had bought drugs from Koe, now 45, multiple times.

On Friday, Mr Sudheesan said Koe denies this accusation and read out a statement his client gave the Central Narcotics Bureau on Sept 22, last year on the day of his arrest. 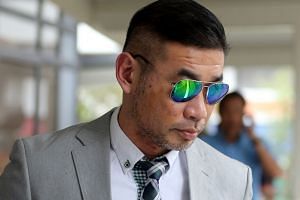 According to the statement, Koe, who is also the managing director of local pharmaceutical firm ICM Pharma, had said: "I have never sold any controlled substance to any individual including Eric Yeoh Kim Koon ever and vigorously reject and deny such charge."

Koe is on trial for one count of drug trafficking. He allegedly sold Yeoh, who used to be his sexual partner, one packet of crystalline substance containing 0.17g of Ice for $240 on Aug 25 last year.

Koe is accused of committing the offence in his Spottiswoode Park Road home at around 7.30pm that day. He has five other drug-related charges against him for offences including methamphetamine consumption and possession. They have been stood down and will be dealt with at a later date.

Deputy Public Prosecutor Wong Woon Kwong had told the court on Thursday that Yeoh was arrested in his Compassvale Street flat at around 7.20am on Sept 15 last year. Koe was arrested a week later.

Yeoh also told District Judge Olivia Low on Thursday that he had consumed Ice with "Internet friends" he made on Facebook and gay dating app Grindr.

But when queried by Mr Sudheesan on Friday, Insp Parthiban said he could not remember checking Yeoh's Grindr chat history.

Koe is expected to take the stand when the trial resumes on Dec 18.

If convicted of drug trafficking, he can be jailed for between five and 20 years.

He can also receive between five and 15 strokes of the cane.