Till now, they have often been the silent victims caught between feuding parents. But children whose parents are divorcing now have a voice as they are being consulted by the Family Justice Courts (FJC) on how the separation is affecting them.

The FJC hopes that this Child Inclusive Dispute Resolution model can help parents hear and understand what their children are going through, and consider their feelings and wishes as they thrash out custody and other parenting issues.

Madam Sophia Ang, its director of counselling and psychological services, told The Straits Times: "We find that parents don't really know what their children are feeling. Some kids may not want to tell their parents, as they don't want to upset them."

But children - despite how nonchalant they may appear - are hurt by their parents' conflict, she said. Some become depressed, while others become angry and defiant.

In the past year, the FJC piloted this child-inclusive mediation model on a group of 20 families, involving 35 children aged from seven to 18.

The results of this pilot study were encouraging, Madam Ang said. Three in four of the couples managed to agree on all the children's issues, such as who the child would live with and how often the other parent can visit, instead of fighting it out in court.

Three months after the mediation ended, the children surveyed said their parents fought less. The couples said it made them more mindful of how their behaviour affected their children.

The FJC hopes to expand this to include more families. This is how it works: Trained counsellors work with the children to find out how they are affected by their parents' divorce. They share with the parents what their children have said and offer suggestions on how the parents can help their children cope better with the break-up. 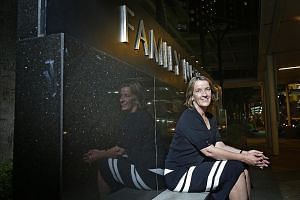 With this knowledge in mind, and counselling support at hand, parents attend mediation sessions to work out custody and other issues involving their children.

Madam Jaslyn Ng, a senior court counsellor, said: "Many children feel they are caught in between their parents and they have to take sides. They worry about upsetting their parents or they fear their parents will abandon them. So they may not tell their parents what they really feel."

Take, for example, two teenagers, a boy and a girl, whose parents are divorcing. The father, a professional, cheated on his homemaker wife. Both parents, who are in their 40s, are fighting for their children to live with them after the divorce. The teens told their father they wanted to live with him. In fact, they preferred to live with their mum, but did not dare to tell him this.

Madam Ng, who dealt with such a case, said: "I had to help the dad understand that his children were not rejecting him, but they felt more comfortable living with their mother. He was afraid of losing his relationship with them."

The man decided to stop fighting with his wife and allow the children to live with her.

Lawyers said what the child suffers or hopes for is often left unsaid or lost on warring parents.

Lawyer Foo Siew Fong said divorcing couples are often too caught up in their own hurt feelings to be able to really listen and understand what their children are going through.

Lawyer Rajan Chettiar said: "Parents just do what they think is best for their child. If we are talking about acting in the child's best interests, then the child's voice must be heard more often."

Since 2011, the FJC has made it compulsory for all divorcing couples with children to attend counselling and mediation sessions at its Child Focused Resolution Centre. This is to help them work out care arrangements for the children, instead of fighting over them in court.

Madam Ang said: "We want to shift mindsets away from their marital conflicts to really thinking about their children."

A version of this article appeared in the print edition of The Straits Times on October 02, 2015, with the headline 'Children get a voice in cases of divorce'. Subscribe
Topics:
More
Whatsapp Linkedin FB Messenger Telegram Reddit WeChat Pinterest Print Purchase Article Copy permalink