SINGAPORE - Three people - a businessman, a former lawyer and a debt collector - were charged in court on Thursday (Sept 26) after they were allegedly involved in an illegal moneylending business from 2012 to 2014.

The 62-year-old businessman, Ho Soo Fong, was the majority shareholder and a director of Invest-Ho Properties in 2012, police said in a statement on Thursday.

As the director of Invest-Ho, he allegedly consented to the company extending loans of about $2 million to eight borrowers, securing each loan on the property of the borrower.

This was despite the company not having the licence to conduct moneylending activities.

The eight properties on which the loans were secured include flats in Bukit Batok, Jurong West and Tampines, as well as a landed property in Sembawang, according to court documents.

Meanwhile, Leong Pek Gan, 65, then a conveyancing lawyer, is suspected of helping Invest-Ho in its moneylending activities by drafting various Option to Purchase and Power of Attorney documents related to the properties used to secure the loans. This was said to be done to disguise the loans as conveyancing transactions.

The third individual, Ho Quan Teng, 36, is accused of collecting loan repayments and updating records of the loans and their repayments. 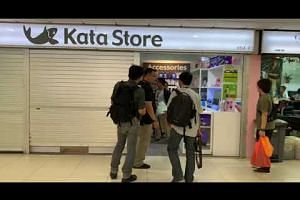 It is unclear if Ho Soo Fong and Ho Quan Teng are related.

Leong is also accused of failing to disclose suspicious transactions to the police and faces seven more charges under the Corruption, Drug Trafficking and Other Serious Crimes (Confiscation of Benefits) Act.