SINGAPORE - Three British nationals who went on trial two weeks ago for taking turns to rape a Malaysian woman in Carlton Hotel were sentenced to between 5½ and 6½ years' jail, with caning, on Tuesday (Aug 15).

The three men had pleaded guilty a day earlier to aggravated molestation after taking a week to consider the reduced charges.

Khong Tam Thanh, 22, was given six years' jail and eight strokes of the cane.

Vu Thai Son, 24, was sentenced to 6½ years' jail and eight strokes of the cane.

Michael Le, 24, was jailed for 5½ years and given five strokes of the cane.

All three had admitted to outraging the woman's modesty by having sex with her while wrongfully restraining her in the early hours of Sept 10 last year. 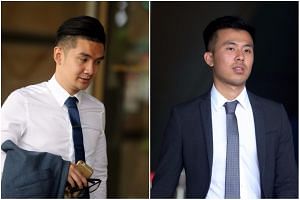 British trio's rape trial: Woman consented to sex, says one of the accused

Thanh and Son also each admitted to a second charge of outrage of modesty by committing another sexual act on the woman, who was then 22 years old.

During sentencing, Judicial Commissioner Hoo Sheau Peng described the conduct of the three men as “reprehensible”.

She said: “While she was asleep, and quite unable to protect herself, they took advantage of her vulnerable state so as to commit these serious sexual crimes... In doing so, they showed no respect for her dignity and autonomy, and no regard for any harm and hurt they might cause to her."

The judicial commissioner drew a distinction between the culpabilities of the three men. She found Son, the only one who had unprotected sex with the woman, to be the most culpable. She noted that Son had exposed the woman to the risk of unwanted pregnancy and sexually transmitted diseases.

She found Thanh more culpable than Le because he left the room door ajar after he had had sex with the woman, facilitating further sexual offences.

The judicial commissioner said that by making representations to the prosecution early on in the trial and pleading guilty to the reduced charges, the three men had spared the victim the agony of testifying.

Son has been remanded since his arrest.

On Monday, Deputy Public Prosecutor G. Kannan sought six years' jail for Le and seven years' jail for Thanh and Son. "They objectified her, they treated her like a thing to be used and abused," he said.

The maximum punishment for aggravated molestation is 10 years in jail.

It was not mentioned in court why the charges were reduced, in what appears to be a plea deal.

The trio, who are of Vietnamese descent, were part of a group of friends who flew to Singapore on Sept 9 to throw a stag party and attend a music festival. They had booked three rooms at the hotel.

On the night they arrived, they went clubbing at Zouk, where one of them, Mr Trinh Viet Anh, 24, struck up a conversation with the woman.

She suggested going to Mr Anh's hotel room, where they had consensual sex, after which she fell asleep.

At about 4am the next day, Mr Anh let Thanh into the room while he left to join the others in another room. One after another, Thanh, Son and Le had sex with the woman.

While Le was having sex with her, she woke up and demanded to know who he was.

She pushed him away and covered herself with a blanket, allegedly telling him that she would never have agreed to have sex with someone as ugly as he was.

She confronted Mr Anh when he returned, but he claimed to have no knowledge of what had happened.

She then texted a friend, who picked her up and took her to his flat to rest. She decided to lodge a police report the same day.

The three men submitted letters apologising to the woman.

In his letter, Thanh offered the woman $5,000. His lawyer, Mr Shashi Nathan, said it was to show his genuine contrition. Thanh had acted in a moment of folly after Mr Anh suggested that he "try his luck" with the woman, he said.

Mr Kalidass Murugaiyan, representing Son, noted that he had come to Singapore not to commit a crime, but for a social purpose.

Mr Ramesh Tiwary, representing Le, highlighted that he was the first to indicate his desire to plead guilty once the charges were amended by the prosecution.