SINGAPORE - The Belgian man accused of killing his five-year-old son in their D'Leedon condominium home will be remanded for another week at the Central Police Division to assist in investigations.

Philippe Marcel Guy Graffart, who appeared in court looking calm and relaxed on Wednesday (Nov 25), is being represented by defence lawyer Ramesh Tiwary.

District Judge Eddy Tham granted the prosecution's application for Graffart to be taken out of remand to assist in investigations.

The 41-year-old was charged on Oct 7 with the murder of Keryan Gabriel Cedric Graffart. He allegedly committed the act at his 32nd-storey home at 3, Leedon Heights. 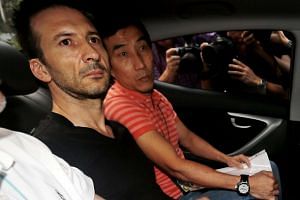 Alleged murder in D'Leedon: Belgian man to be remanded for another four weeks

He was then remanded for four weeks at the medical centre in Changi Prison for psychiatric assessment.

Graffart works for the Singapore investment management arm of Nordea, a company that describes itself as the largest financial group in northern Europe.

General manager of Nordea Private Banking in Singapore, Mr Kim Osborg Nielsen, was seen in court together with three other company representatives.

The case will be heard in court again on Dec 2.

If convicted of murder, Graffart faces the death penalty.