SINGAPORE - An Australian man who initially sought damages of $6.7 million for a traffic accident in Orchard Road has settled the claim for $1.07 million.

Mr Jay Mitchell Smith, 31, who suffered serious head injuries in the accident, had claimed the amount for loss of future earnings and loss of earning capacity.

It was based on his contention that he would have gone on to earn a "a very good salary" as a commercial pilot had it not been for the accident.

As Mr Smith had earlier accepted 30 per cent of the blame for the accident, he will receive $750,000, which is a 30 per cent reduction.

He was taken to Tan Tock Seng Hospital where emergency surgery was carried out to remove a part of his skull to relieve the pressure on his brain caused by internal bleeding. 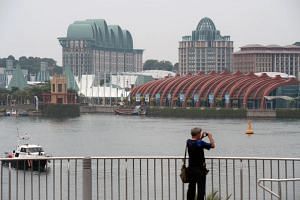 He underwent another operation in Sydney in July 2012, for titanium plates to be implanted to protect his brain.

In his lawsuit, Mr Smith said he continues to suffer from head sweats and severe headaches when the plates heat up during summer and contract during winter.

The most painful consequence, he said, was that his childhood dream to be a pilot had been dashed. He also lost his "fallback job" as a landscaper because he is unable to work outdoors.

In July last year, the defendants accepted 70 per cent liability, while Mr Smith accepted 30 per cent.

Most of the items he claimed, such as pain and suffering, medical expenses and pre-trial loss of earnings, were settled at mediation. He has received $231,841 so far.

However, mediation failed to resolve the deadlock over the sum payable for loss of future earnings and loss of earning capacity.

A hearing began last week for the High Court to determine the amount.

Based on a 100 per cent liability, Mr Smith sought $6.629 million for loss of future earnings and another $100,000 for the loss of earning capacity.

However, after four days of trial, both sides agreed to settle the claim on Wednesday (Nov 15).

The defendants' lawyer, Mr K. Anparasan of Withers KhattarWong, said: "This sum reflected the disadvantage the plaintiff will face in the labour market due to his permanent disabilities arising from his severe head injuries and the loss of chance to become a commercial airline pilot."

Mr Smith's lawyer, Ms Cecilia Lee Thomas of Bogaars & Din, said the settlement was reached after her client, his expert psychologist and two aviation experts took the stand to testify that he would definitely have obtained his pilot licence.

"The plaintiff wanted closure and did not want to inconvenience witnesses who would take the stand this week, such as the former chief pilot of Tiger Air and current Scoot executives," she said.

"The plaintiff and his family wanted closure after seven long years to get to this stage."