SINGAPORE - The Australian man who was caught in a viral video tussling with policemen in Changi Airport Terminal 2 earlier this year was jailed for six months and two weeks on Thursday (Aug 31).

Jason Peter Darragh, 44, who is jobless, pleaded guilty to assaulting a policeman and using criminal force on the officer's colleague at around 12.30am on April 20.

He also admitted that he had hurled vulgarities at a third officer on April 26 and annoyed a woman in public five days later while he was out on bail.

Seven other charges for offences including mischief and using threatening words on public servants were taken into consideration during sentencing.

Darragh flew from Perth and reached Singapore in the afternoon on April 19. He consumed alcohol at Changi Airport before going to Clarke Quay where he continued drinking.

Intoxicated, he returned to the airport later that day as he had to catch a flight to Cebu, Philippines to meet his girlfriend. 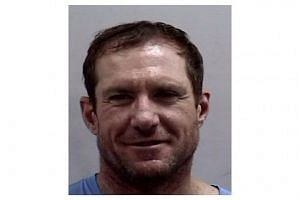 He could not locate the check-in counter in his drunken state shortly after midnight and asked a passer-by Mr Teh Gim Tuck, 48, for directions.

Deputy Public Prosecutor Jason Nim said: "Suddenly, the accused became agitated and began to hurl vulgarities at Teh. Teh ignored the accused and as he was walking away, the accused suddenly snatched Teh's mobile phone from his back pocket and threw it on the ground before walking away."

Mr Teh then alerted the officers at the airport's police post. Inspector Elzac Lee Chee Keong, 39 and Senior Staff Sergeant Koh See Yong, 42, approached Darragh and decided to arrest him when he became aggressive.

When Senior Staff Sgt Koh took out his handcuffs, the Australian exclaimed: "You don't come near me or I will break your face."

Darragh then slipped on his headphones and taunted the officers by dancing. When he continued resisting arrest, Senior Staff Sgt Koh took out his baton and struck him. However, this had no effect on the Australian and he continued to push the officers away.

Darragh then charged at Senior Staff Sgt Koh before striking the officer's face with his hand. The policeman's back hit a metal stand before he stumbled backwards and fell onto the floor.

Four more policeman came forward to help their colleagues and they finally managed to take Darragh down to arrest him.

He was out on bail but was rearrested after he was spotted drunk and incapable of taking care of himself at Orchard Towers shortly before midnight on April 25.

He injured his leg and was taken to Tan Tock Seng Hospital where he abused Sgt Ali Kamaruzaman, 28, with vulgar language at around 1.40am on April 26.

Despite these, Darragh continued reoffending and was drunk yet again when he annoyed a 29-year-old woman by touching his crotch in public at Tan Tye Place near Clarke Quay at around 5am five days later.

Stressing that Darragh had shown as "gross disregard" for the police officers' authority, he added: "Public safety was certainly endangered by the accused's rampage."

Darragh's lawyer, Mr S. S. Dhillon pleaded for his client to be given the minimum jail sentence and fined.

He said: "He is by nature not a hostile or violent person...he wishes to tender his most sincere apologies to all his victims."

Darragh's parents were in court on Thursday but they declined to comment when The Straits Times approached them.

For assaulting a policeman, he could have been jailed up to seven years and fined or caned.