He is believed to be the man seen tussling with policemen at Changi Airport last month, an incident which was captured in two videos that went viral online.

And in court yesterday, it emerged that Australian Jason Peter Darragh, 44, had likely broken the law on multiple occasions during several drunken sprees here, with a total of 11 charges levelled against him.

He is also accused of two counts of causing annoyance to others while drunk in a public place.

In addition, Darragh was also charged with one count each of assaulting a police officer, using abusive words on a man, committing mischief and being found drunk and incapable of taking care of himself in a public place.

He allegedly started his crime spree at the departure hall of Changi Airport Terminal 2 between 12.15am and 12.30am on April 20. 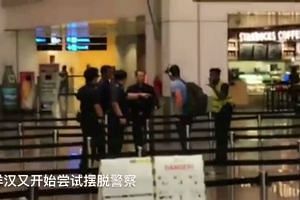 He allegedly threw a man's mobile phone on the floor and used vulgar language on him.

Darragh is also accused of hitting Senior Staff Sgt Koh in the face.

According to court documents, at about 4.50am the next day, he apparently became drunk and caused annoyance in front of McGettigan's CQ bar in Clarke Quay.

Darragh was also allegedly found drunk and incapable of taking care of himself in a restroom at Orchard Towers at around 12.20am on April 26.

He later ended up at Tan Tock Seng Hospital where he is said to have hurled vulgarities at a third policeman, Sgt Ali Kamaruzaman.

Then, on May 1 at around 5am, Darragh allegedly became drunk and caused annoyance to a woman at a taxi stand at Tan Tye Place, near Clarke Quay.

The Australian was offered bail of $20,000 and will be back in court on Friday.