SINGAPORE- A certified public accountant who swindled more than $40 million from several companies now faces a possible life sentence after he was convicted in the High Court on Friday (March 15).

Ewe Pang Kooi, 65, siphoned money over 10 years out of 21 companies that he was supposed to liquidate, and from two other companies where he was managing the finances. He used the amount to feed his gambling habit.

Ewe, a permanent resident from Malaysia, was convicted on 50 charges of committing criminal breach of trust as an agent after a trial which began in July 2018.

In court on Friday, Justice Chan Seng Onn found that Ewe, who did not deny misappropriating the money, had committed the offences "in the way of his business as a professional agent".

This was a key point of contention between the prosecution and defence, as those who commit criminal breach of trust as an agent face a harsher sentence compared with those who are not professional agents.

The manner in which Ewe was entrusted the monies, in his role as a liquidator, receiver and manager for the bank account of a company, is the quintessential case of one who had been entrusted with monies in the way of his business as a professional agent, said Justice Chan.

"The reality of modern society is such that one cannot be expected to undertake all tasks on his or her own. Therefore, there is a wide reliance by the public on professional agents," said Justice Chan, in his grounds for decision. 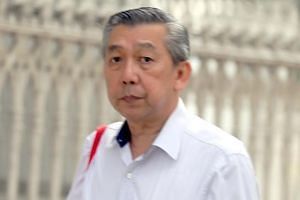 Accountant in dock over pocketing of more than $40m; faces 693 charges

"If the public cannot trust its liquidators and receivers to maintain high ethical and professional standards, the entire insolvency process would undoubtedly fall apart."

The court had earlier heard that Ewe, as the appointed liquidator of the 21 companies, had control of the bank accounts and assets of the companies for him to make payments to creditors or to recover their assets.

Instead, he transferred the assets into various bank accounts that had him as an authorised signatory. The same modus operandi was used for the other two companies, whose assets were under his control.

When he needed more than just his own signature to access the funds, Ewe would present blank cheques for the other signatory to sign before issuing it to the bank accounts linked to him.

Between February 2002 and July 2012, he used the funds to feed his gambling habit, to settle debts or to reinstate amounts he had siphoned off. His sentencing has been adjourned to a later date.

Ewe faces life in prison and a fine for criminal breach of trust as an agent.